One of my all time favorite albums is Quadrophenia by The Who. I love it because it is a complete album, it tells a story that engages the listener. The individual songs are good but fitted together in sequence, they are a masterpiece. Shilpa Ray managed to create that high quality of art with her new album, Door Girl.

On a chilly November night, Shilpa Ray and her touring band played Cincinnati’s best kept secret, Junker’s Tavern. Shilpa Ray and I chatted before her set about the creation of Door Girl and the story that goes along with it. “I knew I was going to write this record. When you work the door, you definitely have that time to zone out in the crowd and think way too much about stuff… I felt like I was either yelling and screaming at people every night or watching the most insane TV,” Shilpa said.

The album begins with “New York Minute Prayer,” a minute long song with a lovely piano intro that immediately sets the stage for a new sound. In Door Girl, Shilpa has switched out harmonium for the more delicate sound of keys. “A lot of the songs I play on harmonium I wrote on piano first… It’s interesting because the harmonium takes up a lot of space and with piano the attack is so much shorter so it’s all about placement. If you overplay on piano it doesn’t sound like rock n’ roll anymore, you can borderline on the Billy Joel thing, you have to stay away from that beat. You have to be careful about how you want to do it.” In New York Minute Prayer, Shilpa Ray sings “I’m here, I’m here,” almost begging New York to listen. Well if New York isn’t listening, you sure have caught the rest of our attention.

Shilpa Ray has been a New Yorker for over a decade. “I really do love it but you can’t really afford to live… I don’t know if I’m going to stay or go. I’ve lived there for 17 years and I’ve never moved.” As a door girl and full time musician, her life is completely consumed by being able to survive the expense of living in the city. In “Morning Terrors Nights of Dread” she sings, “I want it easy, I want to fit in the picture of someone else’s dream.” This song gives me the chills everytime I listen to it. Shilpa Ray has been taking voice lessons since she was 6. The special thing about her is her insane ability to sing in a beautiful voice and a second later switch to the Shilpa Ray Roar. At the end of the song it spans from showing off her fabulous vocal range to the completely guttural roar that makes her music so unbelievably raw and effective. 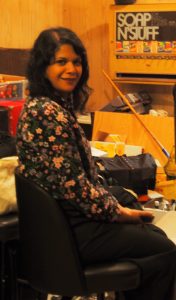 If the vocal range and ability isn’t enough to showcase her strength as a musician, “Revelations of a Stamp Monkey” shows her versatility. The song takes on a hip hop feel so completely different from her slightly doo-wop rock n’ roll sound. “What I was trying to do was take the story and tie it in with [an] argument I had with this dude about how New York doesn’t have a regional sound and it’s only transplants that come in and make the sound. I said no, that’s not right. Hip hop was definitely one of the things that the birth was in the Bronx, it came from New York City. So I was drawing from a lot of things that were indigenous. Punk is from New York, it started in New York…”

The punk tie in comes a few songs later with “EMT Police and the Fire Department.” Previously featured on our website as a song of the moment, the track opens up with a spoken word segment reminiscent of Patti Smith, the ultimate New York punk, and launches into the most driving song on the record. You also have to wonder if “After Hours” is a nod to “After Hours” by the Velvet Underground or a mere title coincident. “I remember giving myself up to music when I was twelve and listened to the Velvet Underground but I didn’t know I was going to play music then… I’ve been singing all my life and playing keys most of it but I was always made to do those things by my parents.” Shilpa Ray didn’t start playing in her first band till she was 24 or 25.

In the timely subject of unacceptable male behavior, Shilpa Ray’s “Manhattanoid Creepazoids” captures this severe subject juxtaposed with a light breezy song. However, the song focuses on what she sees all the time. “We’re getting a lot of stuff that has to do politically with ‘Manhattanoid Creepazoids’ and this is something I’ve been watching go down since I’ve been working there but always knew too about male sleaziness and how they land women. New York is one of the biggest meat markets you’ll ever visit and I work in one of the biggest meat markets. It is not to be taken lightly but the context that I put it in is to communicate to people what an everyday occurrence this is… I have had incidences where I’ve interfered and it does not work.” This is a downside to bar life not only in New York but everywhere, unfortunately. As songwriters and as women we must do what we can to point out that this cannot continue.

Shilpa Ray is a huge doo wop fan, her music has always shown elements of it. Some of her favorites are The Drifters and Little Anthony and the Imperials. “Those were ones I was thinking of for sure when I was drawing on the doo wop stuff.” “Shilpa Ray’s Got a Heart Full of Dirt” and “Rockaway Blues” seem to draw on this feel the most. In “Shilpa Ray’s Got a Heart Full of Dirt” she directly references “Tears on My Pillow” by Little Anthony and The Imperials and it’s a result of rejection from record labels. “The reasoning was my hooks weren’t strong enough. I was angry so I started writing and so that song came out and I was making fun of myself.” But the future of her music career is uncertain. “I’m hitting a weird fork in the road whether I should take a break and learn a new trade and get a different kind of job or make another record because this is hard. Touring is hard and we’re living in a time where there’s not a lot of support for music. There’s always these people that hold too much power in their hands, pulling the strings.”

As the record winds down, Shilpa sings a heart wrenching ballad called “You’re Fucking No One.” “That all started from the seed that any lady, single or on the market in New York, it’s not easy. Every dude that you meet is [messing around with] like eight other chicks on the side. But the city is like that too. It makes you feel special for a very brief moment of time but you know it’s there for everyone and it’s not yours and it will turn it’s back on you very quickly. My thing was to say I saw you back in 1983 when I was a child and you were nothing and now look at you, changing your landscape, acting like you’re too cool for school with your Whole Foods and your artisanal bullshit and all these rich people hanging around and I just really needed to say that. There’s a whole island where no one is allowed to live unless they make over 150 grand a year.” Whether Shilpa Ray stays in the city or leaves, we can be thankful that her time there inspired the masterpiece of Door Girl.