Getting to see L7 live this spring was a long awaited dream come true. Honestly, I’d always hoped there would be a reunion but was doubtful. Then, when news of their documentary got announced I held my breath. And it happened, L7 is back at it! When I spoke with Donita Sparks on the phone, of course I had to gush about how cool it was to finally see them live and I admitted that I smiled through the entire show. Donita was cool about it and said, “there’s a lot of shock and awe and joy going on in our audiences.” I mean, how could you not be in awe of this completely legendary grunge band? 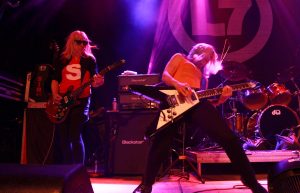 Talking to Donita about the creation of L7 she expressed that she knew they had something other bands didn’t have. “Suzi and I knew we had something unique going on because we were a part of the art punk scene that didn’t have a lot of heavy rock going on. We were taking this mash up of hard rock and punk and looking sort of ironic biker or real biker so we were already dressing differently than our peers. Our style sort of evolved and our music sort of evolved too.” What followed was the completely raw grunge look and sound of L7.

Donita learned to play guitar when she was 16. “My sister came home from college and was playing some scales and I thought it looked really cool. And even though she isn’t really a guitar player, she toyed with it for a minute and it really inspired me.” Donita took lessons and once she learned bar chords she was set. When she and Suzi met, they listened to music that inspired L7. “[We] would get wasted and listen to Flipper and Hawkwind and a bit of Motorhead and Frightwig, they were a big influence. So we were listening to underground punk and sort of semi obscure metal.” And, you can hear a lot of this in their music.

The odd thing about L7 was at the time they came out, there was a burst of female bands in the 90s. They were not Riot Grrrls but any ignorant music fan would lump them into that category because they are an all female band. Today, the focus is less on the gender and more on their kickass music. Donita explains, “Now we’re being written of sort of as a legacy band and as a classic meat and potatoes rock n’ roll American band. We’re being compared now to the Stooges and to Motorhead. Back in the 90’s I think that the press was a bit more intrigued by the gender thing because there was sort of an explosion of it that we helped to kick off. There were a lot of women playing in bands.” However, even though there was this explosion, L7 had problems breaking into the mainstream. 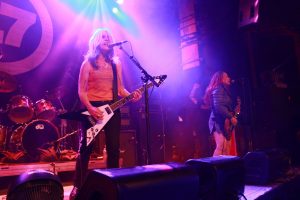 Donita talked a little about the problems they had with their labels. She said, “Listen, labels back in the day had a lot of marketing dollars but there were also a lot of closed doors going on as far as what was really being said in the boardroom. So, we don’t really know why we never got on the radio much or why some of our peers are multi millionaires and we are not. I know that some DJs refused to play us back in the day because we were female and it was part of their misogynistic comedic schtick who would refuse to play chick rock. We didn’t get on any of the hard rock stations, we got on some of the alternative music stations. But we never got on the hard rock stations like Soundgarden and Nirvana did and we were label mates with those guys on Sub Pop and it’s not like our music was difficult to decipher. Our music was accessible. It was catchy hard rock. Maybe we were too much trouble. I think people were a little threatened by us because we weren’t the glamour girls they wanted us to be.”

Today, Donita and their manager are taking on the label responsibility for the band. As they work on a new album (due out in February) they’re figuring all of the details out. But none of this would be happening if it hadn’t been for the documentary. Donita said, “I had gotten a documentary in motion so we needed the cooperation of the band. That kinda started it… That got me everybody’s email addresses. Our booking agent told us people were asking if we were ever going to reunite and that’s something I had never thought of doing but it was sort of a good time because I thought if we wait longer we’re not going to be able to do it… They all wanted to do it.” Which is music to our ears. And, they’ve released a kickass new single, “I Came Back to Bitch.” 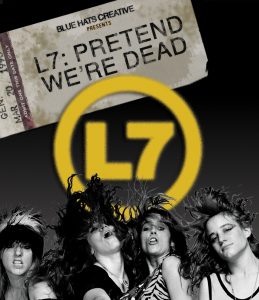 The documentary, L7: Pretend We’re Dead, was definitely something that needed to happen. It’s a close and personal look at the band in their height and tells their story of hilarious pranks and quirky moments and the heartbreak of the band ending. Donita felt it was something they really needed to create. “I felt that we’d been swept under the rug in musical history and I was almost looking at my 50 year old self honoring my 20 year old self. Hey, we’ accomplished some amazing shit for people who never studied music, for people who weren’t musical virtuosos who didn’t have a lot of money. We did a lot on our own. We also had this amazing footage that we shot ourselves and we happened to be one of the architects of grunge. We were there and had a camera. This footage is a time capsule, it’s important.”

With their new album in the works I wanted to know a little about how L7 writes songs, especially since they all have a share in the vocals. Donita said, “We all write on our own and Suzi and I are writing partners as well. We collaborate a lot. I wrote “I Came Back to Bitch.” I thought Suzi’s voice would be cool on the quiet part… I’m coming off so fiesty on my verses that I thought on the bridges her voice would be cool and quirky.” The album is being recorded in September and they just finished their Pledge Music campaign to fund the creation and completion of it.

Looking back at the prime of L7, they were definitely troublemakers. Donita is pretty well known for a few stunts she pulled on live tv or at shows including pulling out her tampon and throwing it into the crowd and pulling down her pants on live TV. But, crazy things also happened to them.

“So many birkenstocks were thrown up on stage during Lollapalooza and fan’s clothing, lots of fans disrobing and throwing clothing. Our road crew started to take barbeque tongs to pick up the debris and remove it from the stage. It became a bit where they didn’t want to touch it so they had these long BBQ tongs on stage,” she laughs. Donita admits that as far as pranks go, “I was the fly in the ointment with that kind of stuff. But, we’ve all got our PHD’s in trouble of different kinds.”

While the band was broken up, Donita had a solo project called Donita Sparks and the Stellar Moments. She also started a non profit called Cash Music which still exists today that helps to empower musicians and protects them from big industry labels. She wrote for a pop culture blog on a political site for four years. But today, her focus is back to L7, writing new music and working hard so they can get the recognition and respect that they well deserve.