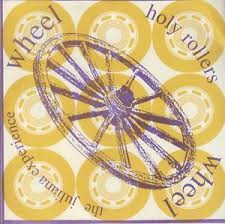 Looking back on my life I feel I was really lucky to be who and where I was in the early nineties. I was in my early twenties and tapped into the D.I.Y. punk scene. I was part of a volunteer run record store called Network in Dayton, Ohio. My life was records, bands and zines. It felt like my friends and I were creating our own culture. It was the time of Riot Grrrl and Queer Core and the doors were wide open for everyone. There’s certain artifacts in my seven inch collection that I go back to over and over again and they still hold up. I like to take a little time and tell you about a label called Simple Machines and a little record called The Wheel.

The Wheel came out on Simple Machine Records as part of their self titled seven inch series. Other installments were four way splits. “Inclined Plane” featured Superchunk and “Lever” featured Columbus’s Scrawl. All the vinyl is long out of print, but the series is compiled on a CD that’s still available. Simple Machine Records was run out of an Arlington, Virginia P.O. box by Jenny Toomey and Kristin Thomson. Those two ladies were also in the band Tsunami. You really should check them out. They have wonderful harmonies layered over powerful rock guitars that remain on the pretty side of Fugazi style emo. Like a lot of D.I.Y. bands Tsunami started a label to put out their records and their friends records. They were part of a network of labels and got distribution through Dischord records. They had affiliations with Superchunk’s Merge Records, Kathleen Hanna’s Kill Rock Stars and K records. What made Simple Machines stand out is that they specialized in themed 7” compilations. These records had beautiful packaging and colored vinyl. A classic example of Simple Machines packaging was the Neopolitan Metropolitan 3 seven inch box. The box was hand silk screened in pink and brown on a cream colored box. The art work was vintage ice cream clip art. The three records were cream, pink and cocoa colored. This wasn’t product; it was a labor of love. Another example of great packaging from this label is The Tsunami “Matchbook seven inch. The sleeve was an oversized pop art matchbook that folded out. The record is in an inner sleeve that has an enlarged photo of matches. Inside the flip up match book is one of those learn to draw correspondence art school adds. The label also did a singles of the month club called Working Holiday. I wish I would have had more money to buy records back then, or else hadn’t wasted so much money on crust…anyway some of the best records of that era seem to have come out on Simple Machines. If you’re ever bored in a record store looking through the used 7 inches buy anything on this label. They’re worth the price of a sandwich. If you’re thinking about how to do a record label then they are a model to check out. They even put out a pamphlet on how to run a record label that is still available as a PDF on Simple Machine’s website.

Anyway I wanted to talk about one record in particular, The Wheel. This seven inch teams up two different acts: Juliana Lueking and the Holy Rollers. Julianna Lueking was a spoken word performer in the D.C. Area. She also appears on Kill Rockstars Wordcore Vol. 5. and The Pre-Moon Syndrome compilation. (Which features The Holy Rollers as well and is apparently still available on vinyl from Dischord Records because I just ordered it while doing research (Thanks Google for putting nostalgia and consumerism at my fingertips.)) The Holy Rollers were a D.C. band who had two LP’s on Dischord. Their drummer Maria Jones is one of the hardest hitting drummers that I ever saw live. 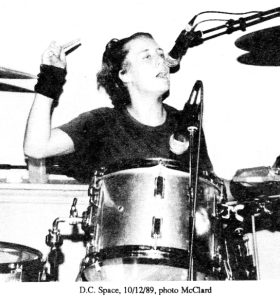 She is the drive of this band. It’s like she’s in the back orchestrating all the guitar noise. When she left; the band broke up. It’s how the two acts team up that really make this record. Juliana’s spoken word gives an extra framework for the songs.
“Moment Before Impact” appears on The Holy Rollers LP, Fabuley. It’s a great song, but it’s an even better song when it follows Juliana’s “The Chase,” whose narrator is a grade school girl who runs from bullies after school to her abusive homelife. This juxtaposition makes the pummeling drums seem like fists pounding the previous narrator and when the male voice sings “You can’t find your way home from yourself” he seems to be speaking to the girl that Juliana invokes. But that girl is all grown up and beating the hell out of a drum kit while the feedback rings. As a nerd who was picked on I know exactly what Juliana means when she says, “Three o’clock school bell rings; Monday the chase begins…”

The other side is even better. It starts off with Juliana doing a spoken word piece from a character named Baltimore Joe. He dreams of escaping the city and his addictions to build a house in the country where they build a stage “…where anybody who’s never put on a show could put on a show.” And if you don’t want to put on a show “…you can just swing in a hammock.” Baltimore Joe reflects that “That would be so fucking perfect” then muses “Damn it all to hell.” Then Juliana sings with The Holy Rollers on “Swallowing My Swallow.” This song pines over the complications and imperfections of modern love. The harmonies echo Baltimore Joe’s “Damn it all to hell” while Juliana reflects that she “Can’t see truth without looking through tears” and that people in this time of AIDS awareness “Can’t make love without plastic between us.”

Apparently there is no link to this seven inch on YouTube. I beg of my friends; hook me up with a digital turntable and show me how to make this happen. Until then I’ll bring this EP out anytime I DJ (or I could tape it for you).