My friends and I drove up to Detroit on a Saturday in May to catch The Detroit Cobras at the El Club. The show was sold out and the club was so packed you could barely order a drink- a direct reflection of how loved the Cobras are in their hometown. Opening for the Cobras were the awesome local bands, Prude Boys and The Deadly Vipers. This was not a show to miss.

Rachel Nagy, now a resident of New Orleans, was clearly happy to be back in Detroit as she spent moments in between songs bantering with the audience, prodded gently to get back to the music by guitarist, Mary Ramirez. The band sounded great and played all of their hits. But let’s go back to the origin of the band…On Sunday afternoon we got to hang out with Rachel and Mary at a bar called Woodbridge Pub to learn more about the inner workings and the history of the Detroit Cobras. 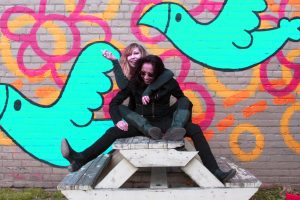 The Detroit Cobras started with the aid of alcohol. Mary recounts, “I had a roommate and he had a lot of records and we started playing guitar and he said, ‘I know this girl…” Rachel interrupts to say, “That’s not true… I was just always there drunk on the floor watching the Simpsons.” As the band coaxed her to sing with them she objected that she wasn’t a singer but once they gave her more beer she reluctantly agreed. Rachel and Mary had been friends for awhile but this brought them closer. “Mary used to take care of me, make sure I was fed, she took me under her wing,” says Rachel. 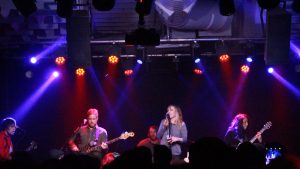 It’s funny that it’s still not widely known that the Detroit Cobras are a cover band. “We’re kinda like our own jukebox” says Rachel. I asked them who their favorite musician to cover is and they simultaneously agreed on Irma Thomas and The “5” Royales. “Lowman Pauling (from The “5” Royales) is my favorite guitar player” adds Mary. “Hot Dog” is an original song by The Detroit Cobras and while they’ve worked on some others they stick to covers. “We do what we do for a reason,” explains Rachel, “giving where tribute is due.”

We took a pause in the interview for Mary to tell a story about the legendary Detroit musician, Rodriguez… Mary had attended a show he happened to play years before at the lot across from where we were having drinks. His song, “Sugar Man” was about a drug dealer who lived in a house around the corner. When the show was happening it got dark out and there was no lighting so no one could see Rodriguez so they lit a bonfire next to him. At one point some guy took the guitar from Rodriguez and threw it in the fire. While this story seems random, it is perfectly in character with whom The Detroit Cobras are… “If there’s one thing we understand it’s randomness… I just had to tell you that story since we’re sitting next to that yard,” laughs Mary. 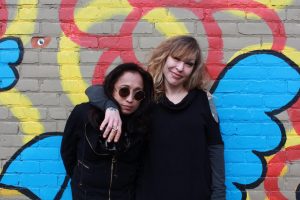 Both Mary and Rachel grew up in Detroit. Mary’s favorite thing about the Detroit music scene is diversity. “We don’t have one sound. There’s so much cool shit around” says Mary. Rachel spent a few years living in New Orleans as a young adult and moved back a few years ago with her husband. She’s in a new band there tentatively called The Angry Lovers. Mary recently recorded some vocals for Jonathan Richman of the Modern Lovers. As far as the Cobras go, they have new music in the works. They’re thinking of putting out some 45s and have a few great new songs recorded.

The best thing about Mary and Rachel is how personable they are. My friends and I spent a few hours with the Cobras over drinks and immediately felt like their friends. The interview ended with all of us walking to Mary’s house and getting in her car to listen to the new song. We hung at the house for another hour or so and ended up over at Becky Tyner’s house across the street. It was an unforgettable day spent with truly important women in rock. Mary Ramirez and Rachel Nagy are extremely tough women and their love of music is a gift to the music world. As Rachel said towards the end of our interview, “we’re a band’s band.” Their dedication to old rock n’ roll gives rebirth to so many songs.