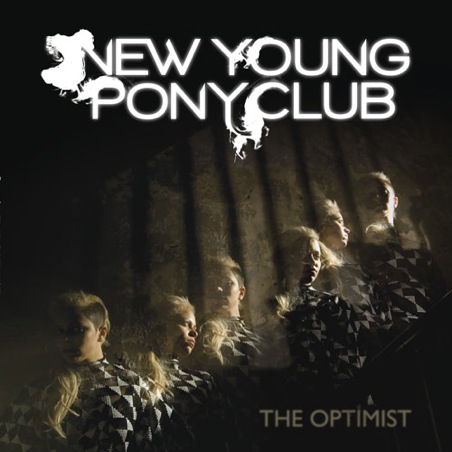 New York Pony Club, what a name. This five piece is from London, England and has a wonderfully catchy sound. The band formed in 2005 and has released two albums now. The Optimist, their sophomore release came out this past March and is a great follow up to their first release, Fantastic Playroom.

Known for their upbeat and hook driven sound, New Young Pony Club makes you want to dance. Their sound is post punk and could almost be compared to the Talking Heads except with female vocals. The Optimist marks huge improvement and growth for the band. It is edgier and slightly darker, less monotone vocals but still remains disco-punk.

While this album may not contain the hits that their last album did, it is of better quality, musically. Vocalist, Ty Bulmer, fronts the band and she channels so many great musicians in this album. The Optimist encompasses a sound that fans of New Order, ESG, and Siouxsie and the Banshees will love.

Opening with the song “Lost A Girl” the album jumps right into their electronic pop sound and doesn’t stop. Even slower more serious songs such as “Optimist” and “Stone” still provide something to groove to. “Dolls” sounds like something Lene Iovich would sing. New Young Pony Club has a definite 80’s sound to their music yet they don’t sound outdated.

The Optimist marks great maturation for New Young Pony Club. This is definitely the best pop album of the year.