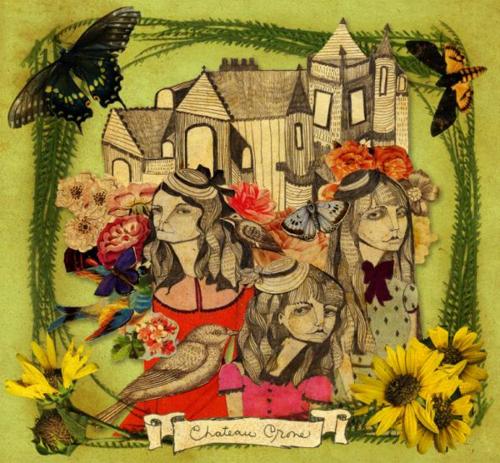 Is it the year 2010? Listening to Agent Ribbons you definitely will feel confused as to how this sound can be a product of the year 2010. This three piece is based in Austin, Texas and has been together since 2006. Chateau Crone is their third album and was released in October of 2010.

Agent Ribbons has a very dreamy sound that manages to rock. This band is extremely retro and these girls are witty. “I’ll Let You Be My Baby” can be compared to something the Dresden Dolls would play. And well the rest of their music, it sounds like something out of the fifties or sixties.

Usually the band will appear as a three-piece but sometimes they perform as just the original two, with just a guitar and drums set up. Their third member, Naomi Cherie, adds violin to the mix. Their songs are based around lyrics and provide extremely catchy melodies. Natalie Gordon has quite the sultry voice.

Agent Ribbons has an amazing sound because they are not overproduced, they manage to have a sound that is not overpowered by too many instruments but still highlights the vocals perfectly. “I’m Alright” sounds like it is straight out of the sixties and can be compared to Holly Golightly or the Greenhornes.

Agent Ribbons is for fans of the Greenhornes, Social Studies, and the Dresden Dolls. This band is definitely one to turn your head because these ladies are extremely talented.