Meeting Natalie Ribbons at South by Southwest was probably the highlight of my trip. On my first night down there, I made sure to attend the Agent Ribbons show. To my surprise, the band was completely different. Natalie announced that the show was going to be a hybrid of Agent Ribbons songs and her new band, Tele Novella. I was excited to get a first glimpse of the new band and was extremely happy with the new material. To my delight, we were able to set up an interview while I was down in Austin.

Natalie and I met at Rio Rita, the bar where she works, on Thursday, March 14th. Natalie is from Sacramento, California and moved to Austin, Texas three and a half years ago, with Agent Ribbons bandmate, Lauren, to be close to their violinist. 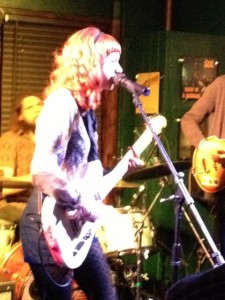 Agent Ribbons was Natalie’s first band. She started playing classical piano at 7 and began playing guitar as a sophomore in high school. In 2006, she met the Agent Ribbons drummer at a record store. Lauren had just bought a drum set but never played it. They decided to get together and jam and formed Agent Ribbons. The band recently broke up after their last tour which was this past fall. However, Agent Ribbons got into SXSW, and Natalie needed a band.

“Tele Novella formed two weeks ago, I needed a band for South by Southwest,” Ribbons said. Luckily, her boyfriend, Jason, was in Voxtrot and his most current band Belaire agreed to provide backup for Natalie. Their first performance ever was their SXSW show at the bar Valhalla. The band is recording in two weeks and Natalie said, “This is my chance to make it happen.” They are releasing their first 7″ in two months and are planning a west coast tour for June.

Here are some fun facts about Natalie:

IK: What is your favorite thing about SXSW?

NR: The new awesome friends I make. Usually I just meet drinking buddies for the night but there are five or so people that I think I’ll keep in touch with after this.

NR: End of an Ear

NR: Deep Time, they just got signed to Hardly Art.

NR: Fiona Apple, I just had a Fiona Apple reunion. I played piano for 12 years and could play all of her songs on piano.

Make sure to check back here for new release information for Tele Novella this spring/summer!