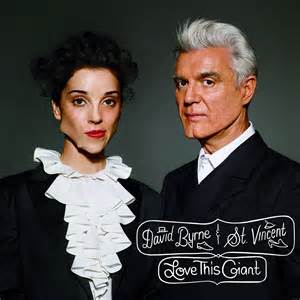 I was excited but nervous to see David Byrne and St. Vincent this past Wednesday at the Taft Theatre. They’ve been on a worldwide tour for their album, Love this Giant. I’ll admit, I had not listened to the album and I was kind of upset with Annie Clark (St. Vincent) from her last show I had gone to at Bogart’s. I have been a loyal fan of St. Vincent’s for years. I’ve seen her live five times before this performance but I was skeptical because last time she had traded her talented band for a band of synthesizers, neglecting to play any of her songs from her first album. Then again, how could I miss seeing David Byrne?

I would have kicked myself if I hadn’t gone to this show. Annie Clark is clearly David Byrne’s muse. She traded her dark curly hair for glamorous bleach blonde which coincides with her little stiff movements, very much like a Barbie doll. The entire band, an amazing and versatile horn section along with Annie Clark and David Byrne had choreographed dances for each song accompanied by a light show. The whole thing was larger than life.

While they played a lot of songs from their album, I was surprised and happy that they each played their own material. St. Vincent songs played were “Save Me From What I Want,” “Marrow,” “Cheerleader,” “Cruel” and “The Party.” Talking Heads songs played were “Road to Nowhere” and “Burning Down House,” along with a few others. The coolest part about their songs was that they each played with each other. They adopted these songs as a part of their collaborative act.

David Byrne was as quirky as ever. You cannot even begin to imitate his dance moves, they are so unique to him. One of the highlights was when they brought out a theremin and Annie Clark and David Byrne literally had a theremin battle, Annie using her guitar and David karate chopping and kicking the air space to get as much noise as possible.

Annie Clark definitely redeemed herself at this show and is back on the top of my list as one of my favorite Women in Rock. If you’ve never seen St. Vincent play guitar, you’re missing out. She can shred in the most delicate and charming way, paired with angelic vocals. David Byrne and St. Vincent are definitely a match made in heaven.

The Black Belles at the Comet