I was lucky enough to attend Riot Fest in Chicago this weekend and saw some extremely legendary Women in Rock as well as some newer acts! It was a three day music overload and I loved every minute of it… except for the nonstop rain on Sunday. Nonetheless, it was an amazing time. Here are some brief show reviews of the Women in Rock at Riot Fest!

Joan Jett & the Blackhearts– Joan Jett played to an amazingly packed crowd of people. She still looks great and sounds great and is as enthusiatic as ever. The Blackhearts played all their hits including, “Cherry Bomb,” “Bad Reputation,” “I Love Rock n’ Roll,” “I Hate Myself for Loving You,” and many more. Laura Jane Grace from Against Me! joined them onstage to play their new duet “Soulmates to Strangers.” Joan Jett will be releasing her new album, Unvarnished, September 30th.

X– X is one of my all time favorite bands so needless to say, I was extremely excited to see them. I got there super early to secure a good spot and I suceeded! The show was even better than I could have imagined. 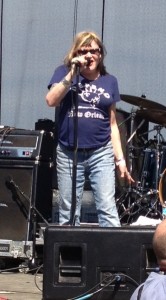 They opened with “Your Phone’s Off the Hook” which launched the crowd into a frenzy. Everyone in the band were such characters. Exene is still so spunky, you can tell she still loves performing. John Doe looked great, duh. He was wearing the shiniest cowboy boots I’ve ever seen. And Billy Zoom was so cute! He could not stop smiling. X played for a solid hour and threw in many hits such as “Los Angeles,” “I’m Coming Over,” “The World’s A Mess, It’s in My Kiss,” “Johnny Hit And Run Pauline,” “White Girl,” “Nausea,” and “Soul Kitchen.” The band sounded extremely tight. They ended their set with “Devil Doll,” and all my dreams came true.

Blondie– For whatever reason, Debbie Harry entered the stage wearing a wizard costume, I’m  still not sure why, but she definitely rocked it. Blondie opened their set with “One Way or Another” which made me think of my ladies in The Binders. There were two young dudes in the band; one played keys, the other played lead guitar which definitely kept the set lively. They played a handful of new songs which reminded me of The Sounds (everything comes full circle since The Sounds draw influences from Blondie). “Rapture” went straight into a 30 second cover of “No Sleep Till Brooklyn” which was random but cool. They played my favorites: “Atomic,” “Hangin’ on the Telephone” and ended  with “Call Me.” 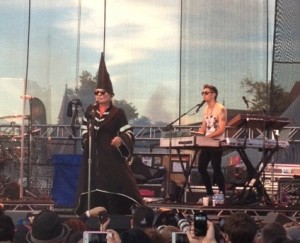 Best Coast– I’ve seen Best Coast quite a few times now and I have to admit I wasn’t very impressed. It was 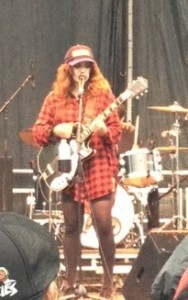 pouring rain during their set but they still had a great crowd. Bethany Cosentino came out in what she claimed was a maternity shirt and bargain hat but she still looked like an Urban Outfitters sales girl. She seemed pretty unhappy about playing in the rain but hey… at least she was covered unlike all of her fans! The band did sound good and they played some new songs from their upcoming EP, Fade Away, which will be released this October. 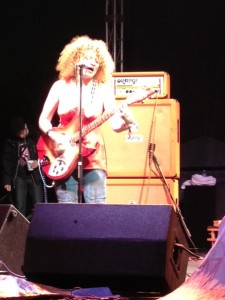 White Mystery– Well, I may sound a little biased since you already know I love White Mystery but they hands down had one of the best shows I saw at Riot Fest. It was definitely the most energetic set I watched. Alex White is easily the best female guitarist out there right now. She has complete control over her guitar and paired with her brother, Francis White’s drumming, they can’t be stopped. There set was short and sweet but definitely left an impact on all those watching. Fun fact: White Mystery had just returned from playing a really cool set of shows called Station to Station where bands played at train stations and on a moving train. In the Chicago station they played with Mavis Staples, Thurston Moore, No Age and Ariel Pink and in Minnieapolis’s train station they played with the one and only… PATTI SMITH!!! I love White Mystery and so should you.

Pixies– I have to give a special shout out to Kim Shattuck of The Muffs who took over Kim Deal’s spot in Pixies. She did a really great job and looked cute doing it!

A Match Made in Heaven: David Byrne and St. Vincent

St. Vincent Shows Her New Side at Bogart’s