I’ve been listening to The Scream a lot lately but I ended up choosing a song that didn’t originally appear on the album for the Song of the Moment. A spooky number for you to kick off spring, “The Staircase (Mystery)” should be the theme song to a horror show. The song was released as a single in 1979 and later appeared on a re-issue of The Scream as a bonus track. Siouxsie and the Banshees formed in 1976 so this song really captures their early raw goth punk feel. The mix on this song is awesome, specifically the different levels on the guitar mix. It creates a jagged feel which really captures the slightly jarring characteristics of The Banshee’s early music. 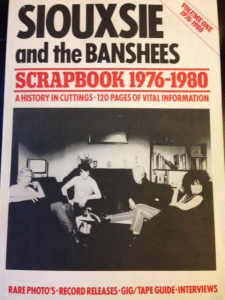 Along with the song of the moment I  have some fun facts to share. My extremely cool godfather, David Coffey, gave me a Siouxsie and the Banshees fanzine which captures the years 1976-1980. “The Staircase (Mystery)” also appeared on a rare bootleg in 1980, something for all of you rare record collectors to note.

The same year that the song came out (1979), Siouxsie and the Banshees played a show with the Cure on September 7, 1979. Before the show, Siouxsie and the Banshees got into some sort of fight which caused guitarist and drummer, John McKay and Kenny Morris to take off. In typical punk form, when Siouxsie and Steve Severin (original members) got on stage to announce their bandmates disappearance and therefore cancellation of their performance, Siouxsie encouraged the crowd to beat them up the next time they saw the missing band members. The Cure came back on and played a few more songs before they invited “special guests” to the stage. Siouxsie and Steve entered and together with the Cure, they played the Banshees song, “The Lord’s Prayer.” Siouxsie announced, “I hope you realize these guys know nothing about the ‘Lord’s Prayer’…It’ll probably be all the better for that. John and Kenny were doing it for the money and you can’t do a good ‘Lord’s Prayer’ with that attitude.”

John McKay and Kenny Morris were replaced with Budgie and John McGeoch. And of course, Siouxsie and the Banshees continued on to be wildly successful. 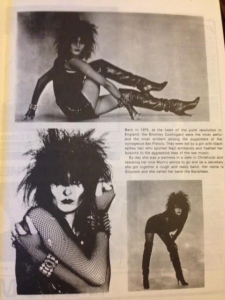