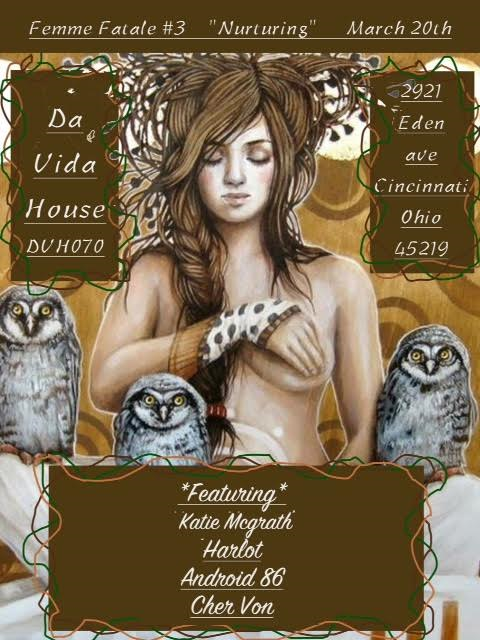 Molly Morris and Ellie Mae Mitchell, whom comprise Cincinnati folk band, Harlot, saw a need for something in the music scene and acted on it. March 20th celebrates their 3rd Femme Fatale night, which is to continues as an on-going festival.

Each Femme Fatale event has fallen around the turn of the seasons. It started because Harlot was “getting paired with bands that didn’t have the same interest as [they] did.” “We wanted to book our own bills,” says Molly. Their focus is to represent a “strong female front” and show diversity of what feminine can be. Acts from the previous nights have included Misty from The Newbees, Jess Lamb, Mr. Clit and the Pink Cigarettes and Wonky Tonk as well as others.

Femme Fatale has taken place at Da Vida House. However, March 20th is the last time it will be held there because the current tenants are moving. The great thing about the venue is it’s equipped with a wonderful sound system and they record each show for the bands to keep.

Molly and Ellie Mae, the heart and soul of Femme Fatale formed Harlot five years ago. They met when they were 16 and had an immediate connection. They draw musical influences from The Staves, Mountain Man and First Aid Kit. They love Cincinnati’s local music scene for its many original bands. However, Ellie Mae said, “we really never found our clique.” Instead of getting discouraged, Femme Fatale nights are meant to include all kinds of musicians. The goal is to “eliminate where you’re from,” and have a night of great music.

Femme Fatale on March 2oth falls on the spring equinox so the theme of the night is nurturing. Acts include: Harlot, Katie Mcgrath, Android 86 and Cher Von. “We’re trying to bring in groups of people that are parents or have jobs from 9-5 that can come and still nurture their need for art,” said Molly. The event starts with a potluck and the show is free with donations for the bands encouraged. The show is BYOB. Da Vida House is at 2921 Eden Avenue. 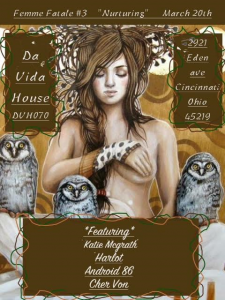