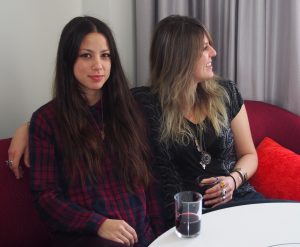 I met up with my good friends Echo Wilcox and Emily Hagihara of Ancient Warfare at the 21c Hotel in Lexington to chat with them not only about their band but… wedding planning! As of January, the rockin’ couple is engaged and plans to be wed in October of 2017.

Echo and Emily met pre-Ancient Warfare in Lexington. Originally, Echo asked Emily to play bass for Ancient Warfare and when she found out she played drums, she asked her to play with the band. At this point in time, Emily had studied percussion but hadn’t played drums for a band yet. “I didn’t have a drumset so I practiced on pillows,” said Emily. This was back in 2011. In May of 2013, Echo and Emily started dating. Even though they had already been in a band together for two years, their relationship brought on some changes within the band. “We have more time to bounce ideas off each other. I feel really comfortable now but when we first started to date I was so nervous about playing in front of her,” says Echo. 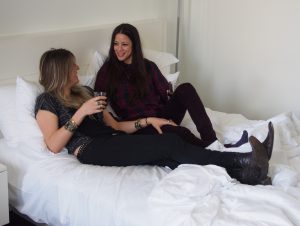 On January 31st, Emily proposed. They had both been thinking about proposing, and Echo says she had started looking for a ring about a month prior. While Emily hadn’t planned on proposing that exact night, she said “Everything was right, I didn’t want to wait.”

Echo was born in California and her love for the water has influenced their decision to get married by the ocean. They plan on being married during the full moon in October of 2017. “Aesthetically we’re incorporating renaissance vibes,” says Emily. Echo adds, “If we do it by the ocean it will have to be more flowy… with found objects from the area.”

They are helping each other pick out their wedding outfits but plan on spending the night before the wedding apart. As for rings, they want to have similar elements. They hope to braid locks of their hair together and have them lacquered inside their wedding bands.

Ancient Warfare now has a new lineup that includes Echo on guitar and vocals, Emily on drums and vocals, Seth Murphy on cello, Derek Rhineheimer on bass and Drew English on guitar. They’ve been working on new material and hope to get a new album out soon. “The Pale Horse recordings spanned over four years. We’ve already played our new songs out quite a bit. I want to get the new album out a lot faster.”

Best wishes to Echo and Emily on a life of rock n’ roll happiness! We love you!!