The story of most original ‘60s garage bands is that of languishing in at least relative obscurity during their original existence. It is not until music nerds, interested in the esoteric genre that is garage rock, collect, compile, and attempt to propagate these bands’ work from decades past that any attention is paid. Lenny Kaye’s Nuggets comp, the re-birth of the Sloths (through the auspices of Burger Records), and the now global consciousness of Death from Detroit are a few glorious notable instances of this bittersweet phenomenon.

It is through this lens that I discovered the ahead-of-their time, boundary-pushing, and downright rockin’ Luv’d Ones. That might’ve sounded like a vague, cliche description. However, one listen to their complete discography (available on a Sundazed-issued single LP, with superb liner notes) entitled Truth Gotta Stand, will convince the listener that this is an accurate description.

Their body of work seems to almost perfectly cover the spectrum of sound that was/is the ‘60s garage idiom. There are badass pre-psych numbers, such as “Up Down Sue,” and the title track, which feature lead guitarist and singer Charlotte Vinnedge’s blazing, out of control, crushingly-distorted and feedback-laden fuzz guitar work, and drummer Faith Orem’s slow, heavy proto-Bonham drumming. Flip to the last few tracks on the B-side of the LP to hear some of the most insanely cool, original guitar playing of any genre, then or now, that was way ahead of mainstream(ed) psychedelia.

At the same time, there are more “traditional” garage/beat tunes, like garage standards “Walkin’ The Dog” and “[S]he Cried,” as well as originals “Dance Kid Dance,” “Stand Tall,” and (also cover) “Scratchy” — the surfy instrumental throwback to the original incarnation of the band, then named the Tremolons — where the sonic focus is the sharp, twangy guitar tones of Charlotte Vinnedge and second guitarist Mary Gallagher. What’s more the tight, grooving, thumpy lows of Vinnedge’s sister, Chris, on Vox bass propels every Luv’d Ones cut right along.

The fundamentally different element at the base of this tasty sonic brew is exemplified in “Please Get Up” and “Walk Me To The Door:” Very low in tonality, Vinnedge actually tuned her guitar, a Gibson SG she’d named Zachary, down a full step. The rationale for this was, by her own admission, because she “didn’t want to sound like anybody else.”

The Luv’d Ones were unique not only in their sonic character, but also in their lyrical content. Not only did they have the aforementioned struggle of being a garage band in the ‘60s, but also that of an all-girl band. The listener may note that Vinnedge’s writing reflects this at times, with some lyrics highlighting observations and/or commentary on gender dynamics, as well as exploring a person’s internal anxieties (“Up Down Sue”), and others offering self-actualizing encouragement (“Stand Tall,” “I’m Leaving You”). 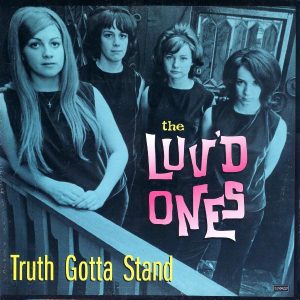 The ahead-of-their-timeness doesn’t end at the band’s playing and singing, though; Vinnedge was DIY punk before DIY punk. Not only did she write almost all of the band’s original material, she drove the band around. And they toured hard — almost year-round from coast-to-coast, playing many shows that Vinnedge had booked, with many of those having posters she’d also done the artwork for!

Despite killer material and playing, national tours — which included playing with the Turtles and the Buckinghams — the Luv’d Ones couldn’t quite eclipse garage band-status obscurity, or the sexist bullshit they were confronted with on a daily basis. So, in this “fascinating modern age we live in” I say there’s no excuse to not listen to the Luv’d Ones. I, for ONE, think you’ll LUV ‘em.