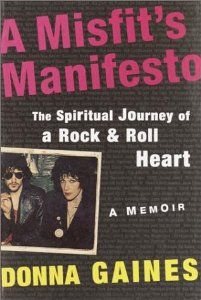 I recently read Donna Gaines‘ memoir, A Misfit’s Manifesto. Gaines, who has a doctorate in sociology has turned a rock n’ roll lifestyle into a career. Having grown up in Rockaway Beach, Gaines spent her entire life around music. Her mother, Betty Bradley, was a professional singer and Gaines was drawn to the lifestyle, spending all of her time with musicians. This led to a career in journalism writing for The Village Voice, Spin, Rolling Stone among others. She also wrote the book Teenage Wasteland: Suburbia’s Dead End Kids. With a past career in social work and degrees in sociology, Dr. Gaines is now a full time college professor.  I asked her some questions about her rock n’ roll life after reading her memoir.
Izzi Krombholz: Around the band the Slugs you said there was a big divide between men and women in the scene as far as gender roles go. How did this divide work in Sluglife?
Donna Gaines: In Sluglife, the gender-cultures were separate but equal as the women were all successful. We did tend to gravitate socially into clusters by gender, but some of that had to do with the guys working on music, playing pool or bonding around guy stuff. The women were immersed in careers and vocations—computer analyst, sociologist, fashion and hair, or office work. Men were all union. 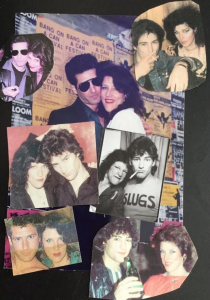 IK: You also spoke about your friend Sue being one of the few women in Sluglife that ended up being a musician, what band was she in?
DG: Tribes of the Moon! She sang, and her brother was also in the band. Today she is a yoga teacher, she’s the only other friend who survived that life. It was hardcore.
IK: As such an avid fan, did you ever get to meet Johnny Thunders?
DG: Yes, he was friendly and readily accessible but everyone was wasted, so it was very casual. It was not unusual for a band member to go cop with fans or other bands, (“Chinese Rocks”) or to share drummers or equipment, so they had that common purpose. I was not part of it, dope was not my drug of choice (Thank God). The women were friendly too, I did meet his wife Julie, again very casual, small talk and friendly stuff about fashion or cooking. The wives and girlfriends were strong and talented in their own right and added much value to the scene. I met one of John’s sons many years later on the street, the kid was struggling with addiction, many demons. A sad story in the end.
IK: Aside from Ronnie Spector, who were your other favorite female musicians? 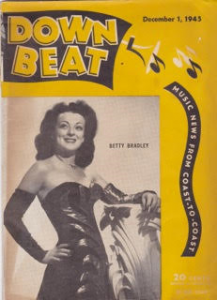 DG: My mother, Betty Bradley!! Loved Mary Weis from Shangri-Las, all the girl groups, Joan Baez, Aretha, Joni Mitchell, Tina Turner, Grace Slick and Janis Joplin, and Yoko. Later, Pat Benatar, Chrissie Hynde, Polly Styrene, Joan Jett, and Sleater-Kinney, kd lang, Debbie Harry and Patti Smith. I am currently planning to teach a course on Women and Music—it opens up so many questions we’re still trying to answer.
IK: In A Misfit’s Manifesto you speak of an instance you had with a family member being there to observe the musicians, do you still think there are people out there who fit this role today? To you, what is the importance of being in that role?
DG: The relationship between the fan and the band is crucial. Without fans or a supportive family and friends who engage, the artistic process can be very isolating. It’s relational, and all about the interaction. Like a writer who needs the reader, even as a fantasy relationship, we are always in a two-way conversation with the performer. It can be very intimate.  In my family, the cousins that did not play, well we danced, and had a lot more fun at family gatherings than most folks do.  One became a disc jockey and myself, a writer/sociologist. I also “married” into a musician family, so I’ve been in that role for life!  I grew up being taught that non-musicians were “real squares” but that never applied to fans, we are part of the music!
IK: Where do you teach and what classes are you currently teaching? 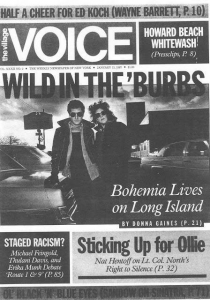 DG: I’m a professor of Social Science and Interdisciplinary Studies at the State University of New York, Empire State College. This is a very innovative and unique institution. Our students are adults returning to school to complete degrees, it’s a very special place and I love working with adults. Many come in with so much knowledge and learning, we work to identify their prior learning to get them credit towards their degrees and advise on degree plans and goals.  I teach a cluster of advanced undergraduate courses in areas such as music, sociology, community and human services, spirituality and recovery, holistic healing and coastal community studies. The music courses are very popular, as are the spirituality and healing studies. Before that, I was a Graduate Faculty of New School University where I taught a graduate seminar in Sociology of Popular Music, and from 1996-9. I taught Sociology of Youth and Worlds of Youth at Barnard/Columbia. Youth Studies, Music Studies, Sociology and Spirituality are the foundational areas I care about.
IK: Is there a band you’re around now that is equatable to Sluglife or Post Ramones empire?
DG: Well in recent years my musical  interests have gravitated towards “early church” music—Palestrina and Monteverdi,  so not exactly a band. I still love Metallica, Ramones, Slugs, Sabbath, Stranglers, and Salsa music, which my parents got me into–they were big fans and loved to dance to the sounds of Cuban and Puerto Rican music. Tito Puente, Tito Rodriguez, Celia Cruz… Our nephew, guitarist Matt Jalbert is in a sick jam band called Tauk, they tour everywhere, and have a huge following, so we try to see them as much as possible. So many of our nieces and nephews  and our friends’ kids are musicians. They are keeping the faith!
IK: Who is your favorite person you’ve interviewed? 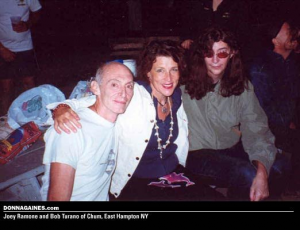 DG: Joey Ramone. It went on for days, years, and I still talk to him every day. Also, my mother, Betty Bradley. I interviewed her for a college paper on women in music when I was 19, and learned so much about her I never knew. I also enjoyed interviewing Marianne Faithful and Frank Zappa. Many of our music heroes are true blue.
IK: Where is your favorite place in NYC to see a show?
DG: Haha, at this point, Carnegie Hall, but we all love the Bowery Electric.
IK: Are there people who still know you only as Tessa (Donna’s rock n’ roll persona)?
DG: Yes! I only reclaimed “Donna Gaines” when I started to publish. 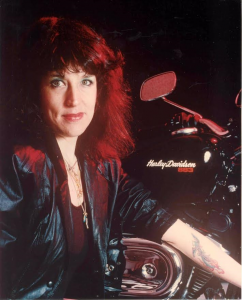 IK: What advice would you give to young women who chose to live a rock n’ roll life style today?
DG: Be who you are, love what you do, don’t let boring people clip your wings or tell you to “get serious” and kill your rock & roll heart. If I hadn’t been a fan or lived that life I would have never known enough to write about music or teach it at college. I never took a course in writing or music, but it’s been my life, mainly because I love it and cared about it. That passion created the life I have had. But I also hedged my bets, got my degree, learned my craft, applied my knowledge and studied hard. Of course I gotta say this; watch the drugs and alcohol, if the partying turns out to be more important than the music and making your dreams real, get some help and clean it up. Women do very well in higher education so follow your heart but get your degree too, so you have some skills and security. Do not let anything stop you from building your empire–the world that reflects and sustains you. Gotta love the life and do the work too. 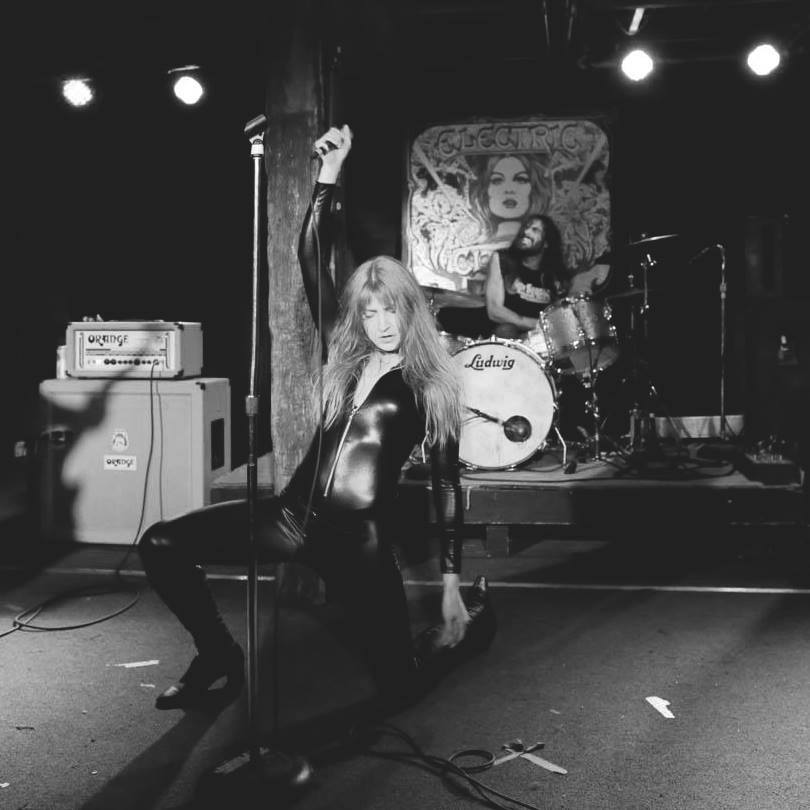 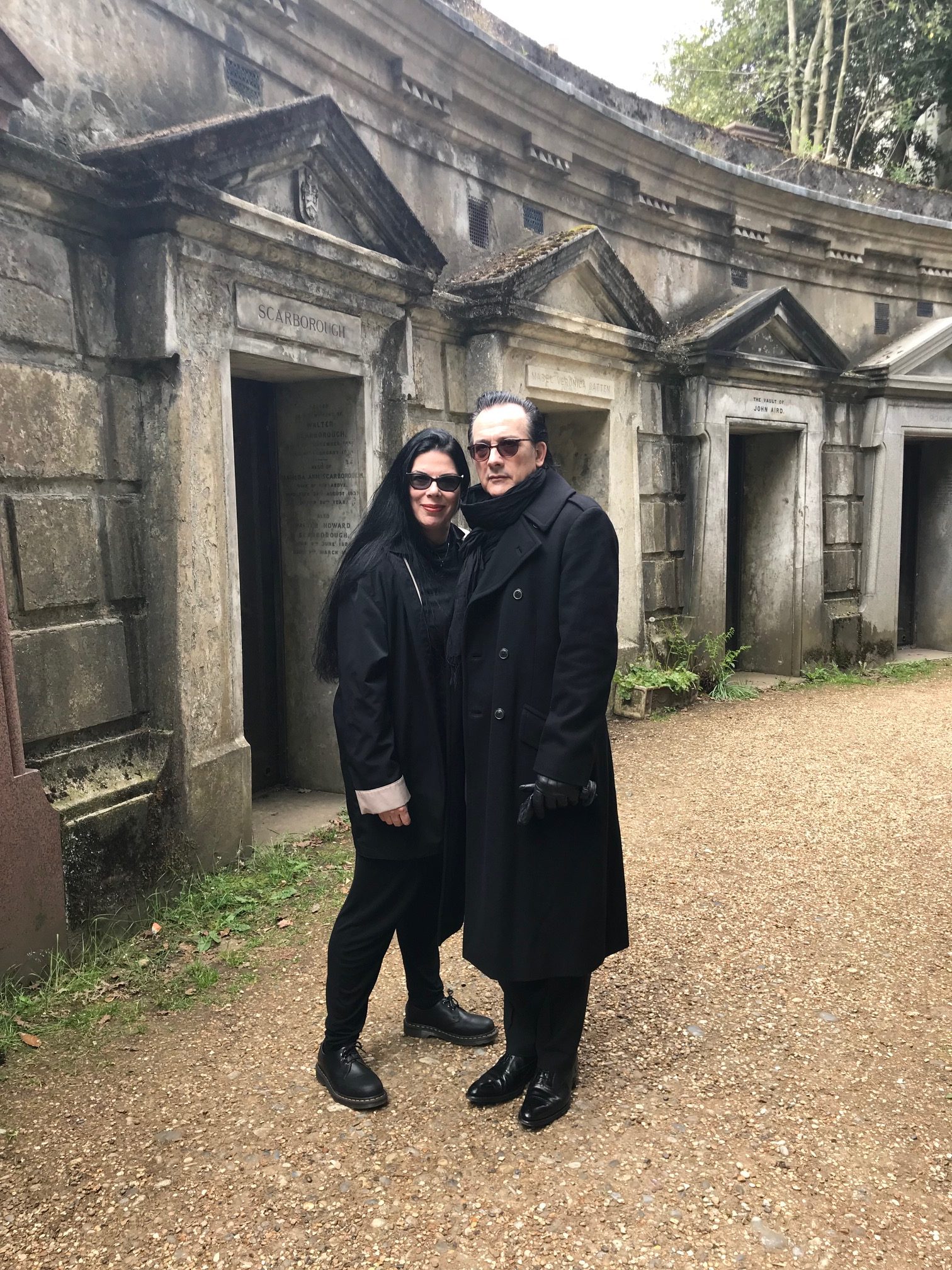