In winter, it’s hard to motivate to do things outside or go places and see people. Whether you’re sick with the flu, down from seasonal depression, or just snuggled in we find here at Women in Rock there’s a lot more TV time in the winter. We’ve compiled our favorite Women in Rock movies to give you history lessons and entertainment during the coldest months!

Hit So Hard (2011)– This documentary is a great inside look at Hole and the heartbeat of the band, Patty Schemel. It’s the story of survival, of overcoming addiction and being able to thrive in the music scene making it out of the clutches of drugs and alcohol. There’s amazing footage of Hole in the height of their career in the 90’s and a lot of Courtney Love and Kurt Cobain at home. And you get to watch Courtney Love eat cookies while being interviewed during the making of the documentary.

The Runaways (2010)– While this movie is slightly over dramatized and a few crucial details of the true Runaways story are left out, it is highly entertaining. It’s a fun watch for fans of the Runaways and is an inspiring story of persisting with a dream. The Runaways also gives an interesting perspective on one of the first all female bands completely run by the emotionally abusive and predatory manager and mastermind, Kim Fowley, setting an unfortunate pattern for many female bands to come. The movie shows how fame can be destructive in Cherie Currie’s case or how passion and drive can allow you to blossom into the extremely famous Joan Jett.

L7: Pretend We’re Dead (2016)– This movie was insanely hard for me to sit through because it made me so excited I wanted to get up, blare L7 and dance around my apartment (which is what I did immediately following the film). The documentary tells the story of one of rock n’ roll’s hardest driving bands and captures their unique and powerful personalities.

20 Feet From Stardom (2013)– A fascinating look at the underappreciated back-up singers who made the stars.

What Happened, Miss Simone? (2015)– Nina Simone had more grace and integrity, even in the midst of crushing life circumstances, than anyone. Brutal and lovely.

Gaga: Five Foot Two (2017)– If you’re a fan of Lady Gaga (and who isn’t?), this intimate interview will make you lose your poker face and collapse in a puddle of laugh-tears.

The Gits (2007)– This documentary (available on Amazon Prime) tells the story of Mia Zapata and The Gits, one of the best punk bands ever. People consider them a Seattle band but they got their start at Antioch College in Yellow Springs, Ohio. I was lucky enough to stumble into a campus common room one night in ‘87 and see them live for the first time. The band was a major influence on Defective Males and any time someone told us that Maria (see Issue 3) sounded like Mia Zapata (and it happened often) we blushed with pride. After college, the band moved to Seattle and lived communally at The Rat House. Seven Year Bitch and The D.C. Beggars also practiced there. They were part of a political scene outside the hype of grunge. In 1993 when the Gits could have had a deal on Atlantic records, Mia Zapata was beaten, raped and strangled while walking home. Suspicion tore that circle of friends apart while they simultaneously rallied together. Members of Seven Year Bitch helped to start Home Alive, a non-profit that teaches self defense to women. Joan Jett joined up with the band to sing Mia’s songs and raise money to investigate her murder. Violence against women was a major theme in Mia’s lyrics and ironically her death drew more attention to this subject. This film celebrates her inspirational spirit. The back story is uplifting, the tragedy is beyond tragic and just as the filmmakers were concluding their documentary, the killer was finally found. 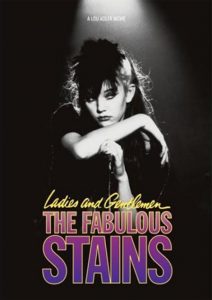 Ladies and Gentlemen, The Fabulous Stains (1982)– This is a true cult classic. It was never officially released, but bootleg VHS copies were passed around after it was shown on the late night cable TV show, Night Flight. That whole bit ties into my article on Penelope Spheeris which is also featured in this issue. The film tells the tale of fictional, working class teenage girls from Pittsburgh who start a punk band and jump aboard a bus with Rastafarian roadie/promoter Lawnboy (played by real life Clash roadie Mickey Dread), who is in charge of a washed up metal band called The Metal Corpses and British punk rockers, The Looters (played by Clash Bassist Paul Simonon and Steve Jones and Paul Cook from The Sex Pistols). The Stains learn to play their instruments, battle sexism and become media sensations, while living the Rock and Roll dream and escaping the Rust Belt. The Stains seems to be based heavily on the Slits. The army of girls that copy their fashion echoes what happened to Patti Smith after Horses came out. Kathleen Hannah declares this film a major inspiration for Riot Grrrl. I couldn’t find it for free anywhere but you can rent it for about five bucks through YouTube or Amazon. It’s well worth it. There’s also a behind the scenes documentary available on YouTube. Apparently, many of the women involved with the film quit because Lou Adler, who also produced Cheech and Chong’s Up in Smoke, was such a sexist prick.

The Year Dolly Parton was my Mom (2012)– A coming of Age movie set in 1976 Canada written and directed by Tara Johns. Roxie and I watched this a while back when I was working on a piece for Women in Rock’s blog about Dolly Parton. We both thoroughly enjoyed this film. It spoke to me because I was a little kid in the 70’s. The costumes and set designs capture the time period well. It made me remember how my friend Tracy was obsessed with Dolly Parton in 3rd grade and what a big star Dolly Parton was with her own variety show. Like my friend Tracy, the main character Elizabeth is also obsessed with Dolly Parton. And like Tracy and myself, Elizabeth is adopted. When Elizabeth finds out, she becomes convinced that Dolly Parton is her real mom and runs away to find her. Elizabeth teases up her hair, puts on her cowboy boots, applies too much makeup then rides her banana seat Schwinn to America. Her mother follows her in a sweet Plymouth Satellite station wagon. (Yes, I coveted the vintage car and the bike.) The cinematography captures the empty beauty of Canada. The mom and daughter meet on the road, attend a Dolly Parton concert and learn to accept each other. Dolly Parton did the soundtrack and provides a voice cameo that includes this bit of wisdom: “Whenever I want something real bad, I find it helps to make as much dang noise about it as possible.” Currently available on Netflix.

Janis: Little Girl Blue (2015)– Janis Joplin is one of my all time favorite Women in Rock. I’ve seen several documentaries about her and featuring her. This one from the PBS American Masters series is my favorite. It’s got it all: the use of family letters that made 1974’s “Janis” so poignant; the footage from Pennebaker’s 1968 documentary “Monterey Pop”; her jamming on acoustic guitar with The Grateful Dead and Flying Burrito Brothers from 2003’s “Festival Express”; the story of her folkie days in early 60’s Austin (which is covered more in depth in “The Dirt Road to Psychedelica”); it even has footage from the rare local San Francisco TV footage of Big Brother before they were signed. Even though I’m a huge Janis fan, I still learned some things and saw photos and footage I had never seen before. My favorite part was the behind the scenes of Big Brother trying to arrange and record “Summertime.” The one thing it lacks is my favorite anecdote about Janis. After she quit heroin and hit the bottle harder and harder she kind of developed a split personality. She would don the feather boas and oversized sunglasses and proclaim that she wasn’t Janis, but her alter-ego “Pearl.” Keep this in mind when you watch this film. “Little Girl Blue” tells the story of Janis’s addictions and shows her pimples and all. I liked how it talked about how her after show heroin use turned into her pre-show heroin use then showed her incoherently babbling on stage in a junkie stupor. This film is also one of the few places where her bi-sexuality is discussed openly. Catch this on Netflix to get a concise portrait of The First Lady of Rock and Roll. If you need more, watch the other films I mentioned above.