Arriving at the Southgate House Revival to interview The Dollyrots starts out like any other interview; Kalie and I grab a drink and wait for their tour manager to let us know they were ready. Even as we walked into the green room, it looks like any other band getting ready for a show, slightly chaotic but perfectly in character with any other punk band. But the huge difference between The Dollyrots and other bands is that their adorable kids are roaming around in big headphones and Kelly Ogden and Luis Cabezas are keeping a constant eye on them, punk parent multitasking.

As we sit down to begin the interview, Daisy (1) sits next to her mom, Kelly, and River (3) is a little busier and more curious on his own, he’s been tasked with getting a glass of water from the bar under the supervision of their tour nanny. The story of the Dollyrots is a love story, but it also proves that taking chances more often than not, pays off. The couple met back in 8th grade and Kelly admits growing up, Luis had the better taste in music. “We were isolated because we lived in this little town in Florida outside of Tampa and we grew up in the 90’s so the best you could do was top 40’s and oldies. To find on obscure music you relied on mainstream alternative bands and I was a big fan of Nirvana,” Luis says. From there they got introduced to bands like Ramones, The Pixies, The Buzzcocks, etc. Luis admits he’s been in love with Kelly since the beginning. “She wouldn’t even talk to me for four years. Finally she went to homecoming with me senior year,” Luis laughs. “He did some questionable things like dead flowers on the doorstep and love letters in blood. He would take my sister home from school so he would end up at my house,” Kelly says. 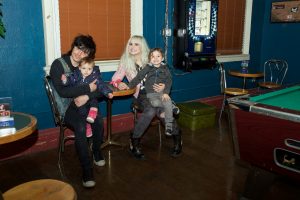 Kelly eventually asked Luis to teach her to play guitar because she was trying to impress someone else. But clearly the time together worked because they ended up falling in love. The couple graduated from high school and went to the same college to get bio degrees. In their last year of college, Luis’ friend asked him to be in a band. “I think a lot of people take periods of their life where they stop doing what they love, like I stopped playing guitar. It was just this thing that sat in my dorm room,”Luis says. But he agreed to be in the band. Kelly joined the band, too, because she didn’t want to be left behind. She said, “If you’re going to be in a band, I’m going to be in the band because if not I know how the story ends.” Kelly played rhythm guitar at first and did backing vocals. They weren’t taking the band seriously because they were still in school and planning on attending grad school after that. They decided to move to California to establish residency and then attend grad school. “We really started the band out there,” Luis says.

They packed up their belongings which mostly included their animals and drove out west. On the way, they saw The Breeders were playing Houston. Luis recounts the story: “We stopped and it was sold out and she cried. We convinced the door guy to let us pay $20 and he let us in. We’re superfans. They finish the show and we decide to be those creepy fans and stalk them afterwards. Their road manager was out front loading amps onto the bus and we struck up a conversation with him and he was like, ‘you’re doing what?? You’re moving across the country right now?’” They admitted they had their pets with them and introduced their pets to the Breeders, a very unlikely turn of events.  Kim Deal ended up giving them her number and told them to contact them when they were in LA and they would try to help them out. And they came through. “They got us a practice space across the hall from theirs and we still have that space,” Luis said. The band ended up releasing a record and having success with airplay. They were still working day jobs and trying to figure out the balance of their musical lives and business lives. “We did that for five years… And then finally around 2006 when Blackheart Records signed us we started going out more,” Luis said. They were at Warped Tour with an early copy of “Because I’m Awesome” on a burnt CD and Kelly handed a copy to Joan Jett. A month or so later they got a phone call from Blackheart Records asking them to come out and see Joan play. Once again, this simple risk paid off. 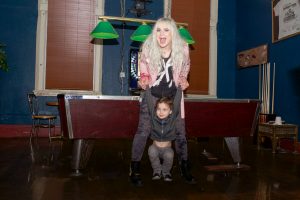 The band was also adopted by Bowling for Soup. “They brought us to Europe multiple times; we’re family,” Kelly said. Jaret Reddick of Bowling for Soup and Kelly are doing a duet album right now. “One more writing session and then we’re recording it,” Kelly says. The collaboration should be out sometime this summer. The Dollyrots aren’t sure what musical direction they’ll head next. Kelly and Luis might do another Dollyrots album or just a side project two piece album or possibly even a kid’s album…

As I mentioned earlier, Kelly and Luis have their kids present with them on tour, a feat that barely any musicians will take on. “It’s a struggle, if you’d been here at soundcheck you’d see…” Kelly says. “They hate it when we play,” Luis finishes. Kelly continues, “because we’re not paying attention to them.” “It’s the one time when we’re both totally focused on something else,” Luis says, “We’ve learned to juggle and manage with less sleep and be more efficient and not take anything for granted.” Kelly adds, “It’s only going to be hard for a little bit.” Kelly points towards her son, River. “He’s so good on tour, he gets it. She’s so little, she doesn’t get it yet.”

The Dollyrots wrote their fifth album, Barefoot and Pregnant, when Kelly was pregnant with River. “There were a lot of emotions. Part of it was we were afraid it was the end. We weren’t sure that it was going to work out. There was a feeling of unknown in every way,” Kelly explains. “We sold the band van and we cried, we got a nice crossover,” Luis adds. However, River was born and the band continued. “We did dates with Black Flag, that was his first tour,” Kelly laughs. The couple says that their lives are pretty normal with their kids despite touring. A lot of it is feeding the kids and cleaning up. “But now, I get two hours to go on stage and feel like the old me,” Kelly says. 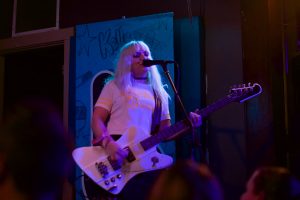 Kelly and Luis have great advice for musicians who want to have kids. Kelly’s main advice is waiting. “We’ve wanted to have kids together since we were 17 and I was 33 when River was born. But we made sure the band was established and we knew what we were doing,” Kelly says. “If you really love somebody stick with them,” Luis says. “And also, your kids will follow you.” Kelly and Luis agree that travelling with their kids is great and teaches their kids a lot. “Having children should not make you feel limited in your life,” Luis says.

The Dollyrots are living proof that perseverance and taking chances can lead to success. Kelly and Luis are also great examples that just because they wanted a family didn’t mean they had to give up their dreams. And who knows what will come of their legacy?