Angela Perley, of Angela Perley and The Howlin’ Moons, always exudes coolness. She’s dressed in paisley bell bottoms, leather jacket and red hat for a gray day Monday interview at the Fox in the Snow in Columbus, Ohio. On a daily basis, the full time musician looks nothing but the part of a 70’s musician who just happens to be stuck in the 21st Century.

Angela’s dad introduced her to Led Zeppelin, AC/DC, Tom Petty and others that inspired her love of music. She attended Ohio University and dove deeper into folk, blues and country music which makes perfect sense because her music is rock n’ roll with an alternative country twang. Angela began a solo career and eventually got set up to play with Chris Connor and Billy Zehnal in 2009. They learned some of her songs from a demo and Angela says when they played together, “it just clicked.” Thus, The Howlin’ Moons were born. They’ve had a rotation of drummers over the years and now they draw on 3 different drummers for tour and local shows. “It keeps us on our toes. It also keeps everything fresh, each person brings their own flare,” says Angela. “It’s made us stronger as musicians because we’re able to adapt.” 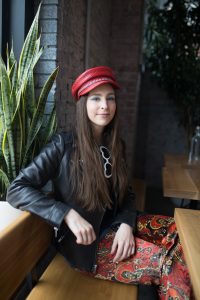 The band just released a live split record with Erica Blinn called Stereogram Session Volume 1 recorded at Thirty One West. Now, their focus is on their 3rd studio album due out in the fall. “We’ve been working out a lot of songs live.” The album is in the process of being recorded.

Angela left college with a degree in English and a teaching certificate. For awhile she was juggling the band, restaurant jobs and substitute teaching. About four years ago she made the leap to do the band full time. Today, she handles the business end of the band. “I’ve worked it out so my expenses are very low.” And, she notes that Columbus is a very affordable city. Angela Perley and the Howlin’ Moons tour a lot so be sure to keep up to date with them to catch them live!

Blood on the Tracks by Bob Dylan

Car Wheels on a Gravel Road by Lucinda Williams

In My Own Time by Karen Dalton 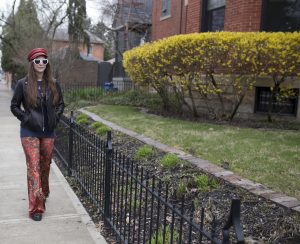