Mimi Schippers is quite the expert in Women’s, Gender and Sexuality studies. She first came to my attention when I was in the graduate program at University of Cincinnati for WGSS. I was researching gender and music and her book, Rockin’ Out of the Box; Gender Maneuvering in Hard Rock, came to my attention. It was a fabulous read and prompted me to reach out to her. Today,  she is an Associate Professor of Sociology and Gender and Sexuality Studies at Tulane University with a specific focus on polyamory. Schippers’ new book, The Poly Gaze, will be out this year.

Izzi Krombholz: When I was naming Women in Rock I struggled with the potential pigeonholing it would do but then I realized I was writing about female musicians exclusively so it made a lot of sense. When you wrote Rockin’ Out of the Box, L7 spoke about how they avoided “women in rock” specific publications because their music wasn’t about being defined by gender. Today, Donita Sparks is on the cover of our magazine. How do you think the association with gender and music has changed over the years and why? 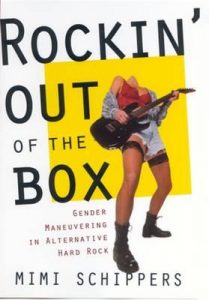 Mimi Schippers: Well, I think that “gender” has changed a lot since I interviewed Donita Sparks, so gender in rock music has changed. Having said that, I think a lot has stayed the same. It’s still male dominant and masculinist, so I think it’s important to lift up, support, and create space for people marginalized by the dominance of white, hetero-masculinity in the industry and in local scenes. My sociological understanding of the world also leads me to the conclusion that talking about “women in rock” as a genre or a specific type of music reinforces the idea that men and women are fundamentally different so the music they create is different (which was exactly Donita Sparks’ point). Perhaps more important, it leaves out folks who are trans*, non-binary, or genderqueer, and those people are as much if not more marginalized by hetero-masculinity than are cisgender women. I think there is a way to forge a feminist (and queer and anti-racist) project without limiting attention to women. But I also believe that, given the state of the world and rock music, giving women (along with gender queer peeps) a voice and platform is absolutely necessary. So bravo for starting this magazine!

IK: You saw a lot of really awesome shows that are referenced in the book. Was there a favorite? Was there a most memorable moment?

MS: It’s impossible for me to pick a favorite. Bringing a bunch of feminist and queer friends to see L7 in Madison is a highlight. None of them had even heard of the band, and the ladies of L7 fucking rocked it! It felt like a revival, only our church was feminism, and we prayed by head-banging and moshing. Another highlight is when I brought my two twelve-year-old nieces to a show in Madison. The line up was Madder Rose, Veruca Salt and Hole. I got their parents permission, but I don’t think my sisters (their mothers) had any real understanding of what I was requesting. We got all “dolled up” in our grunge-wear, and went to the show together. They still talk about that as a life-changing experience.

IK: How did you get started researching gender maneuvering in hard rock?

MS: I was in grad school, and I had been doing research on a feminist activist group called “Men Stopping Rape.” I had been reading a lot of theory and research about sexual assault, and when I finished my Master’s Thesis, which was on the men’s anti-rape group, I felt pretty burned out on studying sexual violence. I admire people who can devote their careers to such a difficult topic, but it was taking a toll on me. I was also pretty tired of the politics of grad school, so to escape, I would go to small rock shows in Madison. It was the early 1990’s and the Seattle “grunge” bands were starting to emerge and doing gigs in small venues in Madison, and  bands like L7, Babes in Toyland, and 7 Year Bitch were coming through town as well. One of my students gave me a mixed tape (yes, we used cassette tapes to make mixes back then) that included Fugazi and Jane’s Addiction. Ian MacKaye was straightforwardly feminist, and Perry Farrell had this wonderfully queer and overtly sex positive thing about him. I mean, his stage name is Perry Farrell (peri-pheral). Get it? As someone feeling peripheral because of my sexuality, politics, and marginalization in grad school, I felt thoroughly hailed and knew I had found my peeps. I had been a rock fan my whole life, and I knew that there had been “women’s music” with a feminist sensibility, but I had never seen men and women adopting a straightforwardly feminist approach to music, shows, and subculture. I also knew that there was no way I’d finish my PhD if I continued to study sexual violence, so I thought, “Hey. I could spend the next two years going to shows and interviewing rock stars.” I remember telling my advisor that I was switching up my focus to study a rock music subculture.. She said, “If that’s what you really want to do, I will support you. But don’t expect to get an academic job when you’re finished.” Fortunately, she was wrong. Ha!

IK: How has your teaching evolved over the years regarding gender and sexuality studies? Do you find students are more open minded today?

MS: I came up in the era of Women’s Studies, identity politics, and second wave feminism. The focus of feminist theory and politics, at least in the academy, was the oppression of women, period. That, fortunately has changed dramatically. I now think about oppression intersectionally. I include ciswomen in my thinking, but my focus is broader and includes trans*, masculinities, queer theory, and critical race theory. I wouldn’t say that my students are “more open-minded” today, but I would say that they are part of a rather huge cultural shift in how we think about gender. Ten years ago I had to explain what “transgender” meant. With only a few exceptions, all of my current students are aware of and down with breaking the gender binary. Also, many of my students in the beginning of my career were focused on gay and lesbian rights, which was and continues to be (especially in the Trump era) incredibly important. But now, while they are well aware of the importance of rights, they’re also interested in queering gender and sexuality. They seem less interested in labels, and more interested in finding ways to undermine racism, hetero-masculine dominance, and heteronormativity. It’s just a different world, and we all are a product and creators of that world, including my students. And that rocks!

IK: How did you get started focusing on polyamory?

MS: I have been non-monogamous and poly for a very long time, and I have experienced prejudice and discrimination because of it. On the other hand, I have witnessed really interesting gender and sexuality dynamics in poly relationships, and feminists and queer theorists were developing really interesting critiques of heteronormative monogamy. I was also well aware that, except for Elisabeth Sheff, who is a badass, groundbreaker, sociologist who studied polyamory long before anyone was talking about it, other sociologists were completely unaware of open or poly relationships. And then, in queer theory, there is the list of things that are heteronormative—heterosexuality, male dominance, white supremacy, nationalism, consumerism, and monogamy. Monogamy was always part of the list, but no one had really unpacked its role in maintaining inequality. I decided to fill these gaps by developing a theoretical framework for thinking about and researching the role of monogamy in perpetuating social inequalities. That’s what I develop in my book, Beyond Monogamy. Side note: I waited until I had tenure (for real!) so I wouldn’t risk my job by coming out as polyqueer or by writing a controversial book. It turns out that this was a really good decision because, when I recently came up for promotion to full prof, one of the senior members of my department tried to sabotage my career because, apparently, he disagrees with my lifestyle and my scholarship. Fortunately, other people in my department, at Tulane, and in my field stepped up, and it turned out well.

IK: Tell me about your new book!

MS: My new book is called The Poly Gaze: Monogamy, Polyamory, and the Cultural Production of Inequality. My focus is on the stories told in mainstream U.S. culture about seeking happiness, and what they say about the role of monogamous coupling in living a “good life.” I look at historical biographies, journalists’ portrayals of polygamy in the Fundamentalist Church of Latter Day Saints, television shows, and films. In each case, I use a poly gaze to uncover hidden assumptions about monogamy and polyamory, and I show how those assumptions reinforce or legitimize U.S. nationalism and race, class, gender, and sexual inequalities. I also look at films and television shows that offer new representations of poly relationships, family, kinship, and community without calling it polyamory.

IK: What advice would you give people interested in having healthy polyamorous relationships?

MS: My advice would be to read books like Tristan Taormino’s Opening Up and Veaux and Rickert’s book, More Than Two. I would also recommend developing a strong feminist, anti-racist, and queer sensibility because, as I argued in Beyond Monogamy, there is nothing inherently transgressive or enlightened about polyamory. You need to be conscious of power dynamics in your relationships AND in society more generally. Also, beware of folks calling themselves polyamorous when in practice, they’re really just doing a male dominant version of hookup culture. Lisa Wade’s book, American Hookup, is a fantastic book about hookup culture, and I would recommend that anyone interested in forging anti-racist, feminist, or queer polyamory read it. It’s not about polyamory, but it will give you some tools to identify masculinist hook up culture masking as polyamory. Finally, be kind to yourself and others because we need more of that these days.