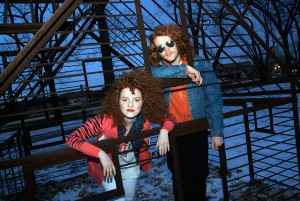 A few days ago I had the pleasure of chatting with Alex White of White Mystery via telephone while she strolled through Wicker Park and I sat in my room scribbling her words of wisdom. Having just returned to Chicago from a tour with Shonen Knife, she had lots to do including checking out a rock poster art exhibit and attend a slip and slide party. All of this being said, she was kind enough to answer some questions I had for her regarding her awesome career as a member of White Mystery.

IK: How did you get your start in music?

AW: It all started when I fell in love with Rock & Roll. In 4th grade I heard the Who and it was a lightning bolt moment. I decided I wanted to play guitar and started going to shows at 12. My mom supported me right away. I took a guitar lesson and then learned how to play by playing with other people.

IK: So when did you and Francis start White Mystery?

AW: As a formal band it started April 20, 2008. As brother and sister we decided to make a real band and in the last three years we’ve played almost 300 shows.

IK: Wow, and what has kept you based in Chicago?

AW: Chicago is a wonderful home base. It’s very central and I was born and raised in the city of Chicago. We travel so much that I don’t feel like I need to uproot everything. It’s a well-kept secret as a musician, very affordable.

IK: What’s it like being in a band with your brother?

AW: We understand each other really well. It’s like an unspoken language. We’ve been best friends since we were kids and we’ve always gotten along really well. I think it also allows us to explore different material in songs.  A sibling band has a different sound. We don’t write love songs.

IK: How long have you been playing guitar?

AW: Since I was 12 or 13. I started playing on a Danelectro, they had just reissued it. Since I was a city kid when I was 15 I decided that I didn’t want a car but I wanted a really nice guitar. I saved up my money, birthday checks and stuff, and I explained to the guy at the music store that I wanted something different and distinctive, not a Fender or a Gibson. The guy pulled the Rickenbacker off the wall and handed it to me, it was like an angel choir. And I’ve been playing it since then. I’m sponsored by Orange Amps and by Lava Cable which is an American company. I think the chords are just as important as the guitar and the amp.

AW: The Shonen Knife tour was very special. It was awesome to tour with a legendary female rock band. We’ve played with Weezer, Mavis Staples, she was a queen and The Coathangers. We’re really excited to play with the Stooges.

IK: What does being a female musician mean to you?

AW: I believe in equality and strength and sisters doing it for themselves. All people have the right to express themselves and should be willing to do your own thing no matter what it is. People will say to me “you’re so good for a girl” and it doesn’t bother me because I’m probably exposing them to female musicians where they other wise wouldn’t get to experience it.

AW: Poison Ivy is definitely my guitar role model. She’s a beautiful redheaded woman who was who she was. Her relationship with Lux was similar to Francis and me; they could hang out for hours and not get sick of each other. Patti Smith is great of course and The Coathangers are awesome. Shirley Manson is really badass. We got to play with Garbage and that was an awesome experience.

IK: What is the first concert you attended?

AW: The first one I went to by myself was Screeching Weasel, which is a great punk band.

IK: What is the favorite city you played so far?

AW: I love New York, I love Austen, I love San Francisco. We have a lot of homies there.

AW: Definitely vinyl, then tapes, then CDs but you can get White Mystery music on all of those mediums.

Guitar World named Alex White a “Top Ten Female Guitarist to Look Out For” in 2011. White Mystery will be back in Cincinnati on September 24, 2012 at the Comet. Check out their video for “Birthday” here.