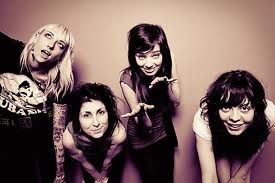 It’s been awhile since I posted a Song of the Week but after my recent interview with Alex White of White Mystery, I can’t help but share my new favorite song. She mentioned a band called The Coathangers and said that I had to check them out. I came across their song “Hurricane” and have been playing it on repeat since then. With a punk rock edge that borders on insanity, it’s hard not to like these ladies. “Hurricane” was released on their most recent album Larceny & Old Lace in 2011.   The band started out as “an excuse to hang out and play parties” and I’m sure glad they did because they’re providing some of the best rock music that falls somewhere in between Hole and The Slits.

Check out their video for “Hurricane” here.

Song of the Week: “Keep You” by Wild Belle

Song of the Week: “Because the Night” covered by Garbage and Screaming Females