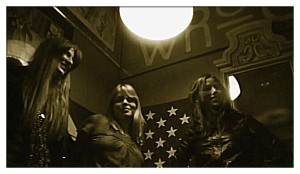 The best way to find new bands is to stumble upon them at shows, at least that’s my favorite way. It was my lucky day back in September when I first saw the ladies of Ancient Warfare perform at the Comet. I was immediately mesmerized with their haunted sound and a certain darkness that was not expected. Ancient Warfare is made up of Echo Wilcox on guitar and vocals, Rachel Yanarella on violin and Emily Hagihara on drums and vocals. A few weeks ago, I sat down with Echo and Rachel at the Green Lantern in Lexington, Kentucky and talked to them about the music they create.

IK: How old were you when you fell in love with music?

RY: I was 5. That’s when I started group and private lessons. My mom is classically trained on violin and my dad got me into rock so I had musical influences coming from both of them.

EW: Both of my parents have always been involved with music so I’ve always loved it. One of my earliest memories is in our old apartment when I was 3 or 4 and I would play guitar with my dad. He would play the chords and I would strum. My mom always sang me Elvis Costello songs as a lullaby.

EW: I had always been a solo artist so Ancient Warfare was my first time playing with other people. I couldn’t play and sing at the same time until this band. The original lineup was just me and another girl on drums.

RY: I was in three bands when I joined Ancient Warfare but this group spoke to me the most. I also do session work.

IK: So how did you all develop the sound of Ancient Warfare?

EW: Having both Emily and Rachel has developed the sound so much. I trust both of their opinions. The songs and lyrics are mine but they add their own thing to it. Every time we play it changes, it doesn’t have to be precise or slick, with us its instinctual.

RY: A lot of what we’ve done is add intros and outros and play with effects.

IK: Who are your influences?

EW: Aimee Mann, she was one of my first concerts and seeing her onstage, I knew that’s what I wanted to do. Also Patti Smith because of her artistic and creative stamina.

IK: Who is your favorite women in rock?

EW: PJ Harvey and Chrissie Hynde. I could never tap into my vocal range until later on and listening to those women really helped.

IK: What does being a female musician mean to you?

EW: In the earlier stuff there was a lot of people involved but it just worked out best as the three of us. With three girls there is a raw and emotional connection. I never looked at it in terms of sexes until people pointed it out.

RY: As a band we bought the Heartless Bastards album and listened to it during a summer run.

IK: What’s your opinion on Elvis being alive?

RY: The King never dies whether he’s breathing or not.

IK: So true. So how did you come up with the idea of doing the T. Rex tribute Halloween show?

EW: On our very first tour we came up with the idea. I’ve always been a big fan and thought why don’t we do this as a cover? At first I was torn between doing a T. Rex, Breeders or Pretenders show. But T. Rex won, I don’t think it was expected, there were no expectations for a girl to sound like Marc Bolan.

RY: T. Rex has always been one of my favorite bands. There’s a heavy string section and that stuck with me before I was playing rock in bands.

IK: What’s your favorite to city to play a show?

EW: All of the midwest has been great to us.

RY: Chicago was really hospitable. It was really great to be accepted in such a big place.

Ancient Warfare will be playing on December 15 at the Green Lantern in Lexington, KY with Wussy (Lisa Walker is one of our very own Women in rock, read her interview here.)