It is with great excitement that we post the first song from We Are Hex since their breakup in 2011 . The song of the week is “Lewd Nudie Animals” which can be found on their bandcamp here. This past Saturday, We Are Hex played at the Comet and despite lead singer, Jilly, not feeling well the band put on a great show. And they return darker than ever. In “Lewd Nudie Animals” 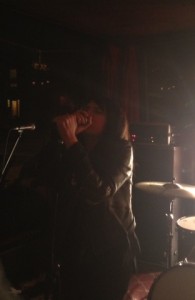 Jilly proclaims, “I’ve never wrote a love song and I won’t start now.” We look forward to more new music from the four piece from Indianapolis. Check back here soon, an interview with Jilly will be posted in the near future!