In the 1980s, a band called Sugar Babydoll was formed by Courtney Love (Hole) and Kat Bjelland (Babes in Toyland); two of grunge’s greatest women in rock. The band was also joined by Jennifer Finch of L7. I wrote about this band awhile ago for Dangerous Minds but what was left out was the story of Janis Tanaka. The band relocated to San Francisco and changed their name to Pagan Babies joined by Deirdre Schletter on drums and Janis Tanaka on bass. Here is an interview with Janis who’s gone on to play with many legendary musicians.

It seems like the projects you’ve played in have always been heavier. What are some of your biggest musical influences?

I don’t even know anymore…I mostly went to punk rock shows, anything from 3 Day Stubble to The Dicks to JFA (whom I didn’t really like but the pit was super fun) to Subhumans to DOA. I liked musicals and folk and disco and pop and rock and metal. There weren’t that many bands with gals in them. I went to any band with gals at one point. Saw L7 and Lunachicks before they put out records. Frightwig was a fave! I moved to San Francisco because I met Jeanie M who was doing mannequin photography before she moved on to frontier taxidermy art and had been in a band, A Happy Death, in the late ‘70’s, all girls in their teens! Very cool. I moved to SF to be in a band with her. I figured, she knows how to have a band. Our band was The Reign of Lee Kuan and we played bike messenger gigs because Carmela, the bass player, was a bike messenger. We threw out cigars and candy. Apparently, everyone liked to come to our shows on acid which makes sense why they liked us so much. Carmela used to demand things: “If you’re going to be in a band with me, you have to listen to this record!!!” I had to read a Van Halen biography and go to Red Kross to practice head banging. Had to listen to a lot of records. Jeanie mostly tricked me into liking things she liked, Dolly Mixtures, The Damned, though I never got into Twisted Sister. I used to listen to things on the wrong speed and two things at once. I liked to put something hard on once side of the room and something soft on the other. Metal and classical. Monkey chants and hard core. Thrash and disco. Then get involved in some project where you keep turning around so the different music is in this ear then that ear, sort of tickled the listening mechanism. Erik Meade was a huge influence. He played with Death because he wanted to play with Eric Breckt from DRI so I saw Death at Ruthie’s a bunch.

How did you get your start playing music?

I’ve been singing since I could open my mouth. I had a little recorder when I was 4 that recorded a couple minutes and then would record over it. I would record myself singing songs, “One Less Bell to Answer”, “My Father Runs the Butcher Shop”, etc. I already mentioned how I moved to San Francisco to be in a band with Jeanie. We met because a friend of mine in the dorms said Jeanie M and I were very alike. All her friends who came to visit her would accidentally call me Jeanie. Apparently, we were alike because we were both Japanesey, liked to go-go dance, liked the color pink, and were obnoxious. That’s what they all said. We became pen pals and when I finally flew up to San Francisco to meet her, we were dressed nearly exactly the same except she was all in pastel pink and I was in hot pink, but we still got along like a happy riot.

Were you in bands before Pagan Babies?

The Reign of Lee Kuan was the band I was in before… It was Pagan Babies because at some school or insane asylum that Courtney [Love] was in, the nuns would come around and ask for pennies for the little brown pagan babies. That’s what she said. I wouldn’t spit as far as I could throw her, though, to totally fuck up an idiom.

How did you meet Kat, Courtney and Jennifer?

After Lee Kuan broke up (Carmela’s other band, Short Dogs Grow, was doing great and started touring), Erik Meade brought me a flyer and said it had all my favorite bands as influences and I should call up. They needed a drummer and a bass player so I called up and said I played bass and drums which I didn’t and they said that they’d already gotten a drummer and could I come try out on bass? I borrowed Carmela’s bass and practiced for three days and got in the band. That’s how I met Kat and Courtney and Dierdre. I met Jennifer while watching the opening band for an L7 show. She was watching them, too, and I said Hi, didn’t meet her again until recently.

What was it like to be in a band with two of grunge’s biggest egos?

Kat’s a sweetie! We spent a lot of time together waiting for Courtney who could be 3 or more hours late for practice and sometimes not show at all – pre-cell phone days so we’d just wait and wait and wait. We’d go to Delta’s Depression Dough where you could get depression dough and bottomless coffee and draw on their butcher paper covered tables all day. I nearly moved to Minneapolis with her. She was sweet and kind and creative and funny and absolutely adorable. I never thought of her as having a big ego. She taught me how to ignore chord charts and just pick things out on the guitar that you like the sound of. 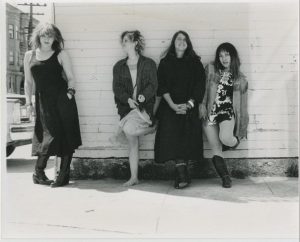 Why did Pagan Babies end?

Like I said, we were often at the practice space waiting for hours and hours and hours, Kat, Deidre and I. Kat mentioned that she’s always wanted to do something harder. Deidre and I both said we were down. So, we started playing this other stuff Kat had while we were waiting and we came down on another day or two and just played that. Courtney showed up to practice one day and she and Kat stepped out and yelled and yowled and howled and then Kat came back in and said Courtney was gone, had gone back to Oregon. She had given Kat an ultimatum to stop playing the hard stuff and only play with Courtney or else. And Kat said no. The harder songs were pretty much Babes in Toyland stuff, great band. And yea, Courtney stole Kat’s whole Katness. Kat had told me she had and I thought Kat was being silly and then I saw Courtney in the Salem witch dress and those shoes and she was even doing her moves and had her Rickenbacker. You know when you don’t really realize you have a look until someone copies you and makes you have to figure out what other kinds of dresses you like to wear so you don’t look like you’re copying someone in your own clothes? That’s what Kat had to do.

What are some of your favorite bands you’ve played in?

I don’t know if I remember all the bands I’ve played in. Jackson Saints and Stone Fox are my two prize fillies, bands that I wrote the bass lines to and worked on the song arrangements with and played fun shows. Reign of Lee Kuan was my first band; we strapped all the guitars and drums on our Vespas and my motorcycle and put the amps in a taxi with Michael. Hammers of Misfortune was my first metal band with split screen vocals and tricky riffs. Touring with Tommy Stinson’s Bash’N’Pop, Exene’s Auntie Christ, L7, Stone Fox, and Pink was all amazing. And I definitely love playing with Winterthrall and Femme Fatale. Last time I counted, I had played with 35 bands. I think my very favorite band to play with was The Big Meat Combo, it was just for laughs and beer, but mostly laughs, nothing was sacred. Tho my favorite shows were playing the Le Mans with L7 and playing the Kids’ Choice Awards with Pink. And the last (but not really last) Stone Fox show at the Bottom of the Hill.

Janis is currently playing in The Big Meat Combo and Femme Fatale. She states that the next Femme Fatale show is a “big secret” that will be announced soon. They also have a new album in the works.

Janis says, “We have a not-so-secret killer record that has been forming in the cocoon of hard knocks: death, disease, death, accidents, disease, more accidents… for many years. (Kind of sounds like the lineup for the metal show I saw at Ruthie’s Inn in the 80’s: Death, Desecration, Sacrilege and Insanity. ) When the album comes out to very little fanfare, you should get it and be amazed at the weighty metal that came out of all that heavy life.”