White Mystery returns to Cincinnati this Thursday, May 2, to play MOTR for the first time. A lot has happened since they last played Cincinnati in September. Miss Alex White and I chatted the other day to catch up on some of the new and exciting White Mystery happenings! On 4/20, they released their 3rd full length album, Telepathic. Already this year, White Mystery has played 57 shows in 10 weeks.

IK: So tell me about Telepathic, your process in both creating it and releasing it.

AW: Well its the 3rd album written, recorded, produced and released by White Mystery. We recorded it in Oakland, California at the Creamery with Greg Ashley. This was our first time recording an album while on tour and outside of Chicago. It came out about a week ago and is almost already sold out. We’ve never seen this aggressive of success from an album.

IK: How did you have time to record it while on tour?

AW: When you create a schedule for yourself you find a rhythm in your work. You know you need to give yourself at least 6 months to produce an album and we wanted it to come out on 4/20 and be somewhere sunny and interesting. Also when you’re on tour you’re at your tightest.

IK: How was your tour in Europe? Did you have a favorite place?

AW: It was a wonderful experience. We were able to go to Scandinavia, Sweden, Denmark. I’d played Europe before with the Red Orchestra. It was great to get turned on to European bands which are otherwise hard to discover. I really liked Lucca, Italy. We played on a four band bill and each band was really amazing. When they play with people from out of country you can tell they try to step up their game. We’re going back to Europe this month it will be our first time to play in England. We’re also playing the Vicious Soul festival in Bordeaux and playing the Canary Islands off the coast of Africa.

IK: What did you think of SXSW this year?

AW: We love connecting with bands and new audiences. This year we played a dozen shows, last year we played 17. Austin has a really nice scene. And while SXSW is aggressive its still technically a break for us since we’re not driving from city to city.

IK: Who are your favorite bands you’ve met this year?

AW: Sick Hyenas from Hamburg, Germany. Hamburg has a very cool and interesting vibe. There’s a big red light district where all of the rock clubs are. It’s very psychedelic and different from Chicago. Sick Hyenas are kind of like the Night Beats. It’s psych infused rock but very fresh. We also really like Wild Wild Wets from San Diego and we’ve done lots of shows with Warm Soda. They’re our road buds. They call themselves hush punk but I’d call it power pop. Also Heller Keller from LA. They’re city kids and it took me years to discover the scene near Skid Row in downtown LA.

IK: What’s the craziest thing that’s happened to you on tour this year?

AW: Well a toilet got broken at our record release show in San Francisco. A dude ripped it out of the wall, there was water and porcelain everywhere. Meg White came to our show in Detroit which was really cool and Aaron Danger from Jackass came to our Portland show. I think the coolest thing that happened was when we were driving through Montana. We saw a glimmer of a rainbow but as we drove closer we realized it was a double rainbow surrounding a sunset in Missoula. Touring is also about enjoying your journey to the shows.

Be sure to 1. Go out and see White Mystery at MOTR this Thursday, 2. Buy their new album Telepathic and 3. Look out for a 7” they’re releasing on Third Man Records. 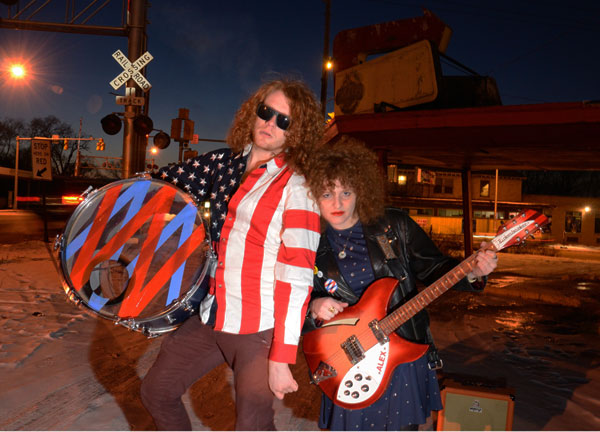 An Exclusive Interview with Miss Alex White of White Mystery