It is beyond an honor to have Alice Bag as our cover woman for issue #001 of Women in Rock. She is a lifelong feminist who perfectly represents the strongest Women in Rock.

Growing up in a home with an abusive father drove Alice towards feminism. “I smiled whenever someone challenged him,” Alice says. However, she didn’t truly become aware of feminism until the famous battle-of-the-sexes tennis match between Billie Jean King and Bobby Riggs.

As a teen, Alice was a huge fan of glam rock, although her influences started with ranchera and soul music. Later in high school, she started forming her first band with Patricia Morrison and they were heavily influenced by glam rock, Elton John, David Bowie and Queen. I asked Alice how she decided to combine feminist ideas with music and she said, “punk rock did that for me.” “I was going into a scene that was very sexist. I had heard of Fanny but they were a magical unicorn- women were seen as sexual objects.” Alice also mentioned that at the time, groupies were more common and popular. Female musicians were barely mentioned in rock magazines. She says that all changed when “Punk rock came along and women were picking up instruments.” The main goal was to “play well enough to get [their] voices heard.”

LA embraced the punk scene and specifically female punk musicians. “In LA, most bands had at least one female member or manager or it was a female booking the shows. Punk was so raw and valued an unfiltered sound that was perfect for women.” In Pipe Bomb for The Soul, Alice says, “The kind of music I play has been liberating for women because it’s more about having something to say than being a great musician” (pg. 38). She notes that with the birth of punk, people were more open-minded. There was finally an audience for these rockin’ women. 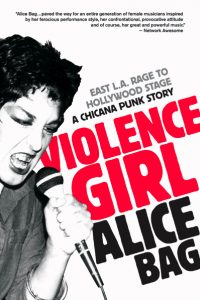 “It was an exciting and creative community, a thin line between madness and genius,” says Alice. She lived in the Canterbury Apartments for a while, which housed a punk community where something was always happening, whether it was flyer making, altering clothes, band practice or partying. However, as the punk scene changed it became more aggressive and violent and it was harder to stand in the front at shows as a woman. “Women were being shoved into the background…. It ultimately led to the riot grrrl movement.”

The Bags broke up in 1979, which led to Alice joining Castration Squad (with Mary Bat Thing whom later changed her name to Dinah Cancer and started 45 Grave). But she was ready for a break from the action. “When I went back to school I pulled back from the music scene.” She finished college and became a teacher.

Years later, with the publication of Violence Girl, Alice hit the road again. “Reading in public seemed really scary. I started booking my own book tours with music along the way. I would pick up a guitar and play songs first.” After publishing two books, Violence Girl and Pipe Bomb for the Soul, Alice Bag released her first full album this year. “I’m really excited, I’ve never released an album before.”
Alice Bag is a visionary and role model. She is a mother, a teacher, a writer, a musician. Today she’s “inspired by Girls Rock Camps and art that challenges patriarchy.” Alice Bag says to new musicians, “if you’re stating out, don’t be a perfectionist. Figure out what you want to say. Let your desire to be heard guide you. If you’re telling a truth that needs to be told, people will listen.”