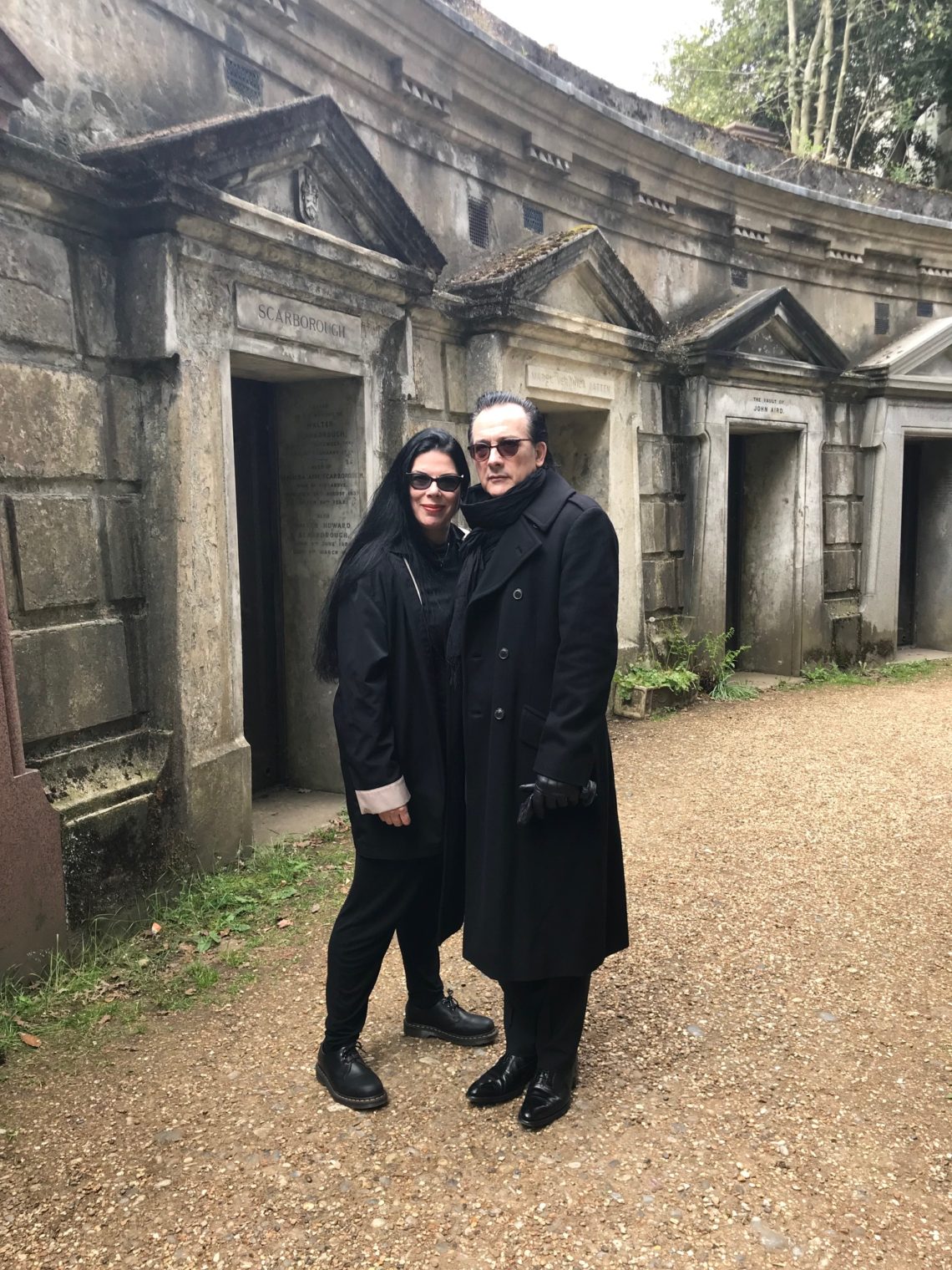 I’ve chatted with the lovely and haunting Patricia Morrison via the interweb for a few years now for interviews and such. When my family planned a spring trip to London I thought, this could finally be the time I get to meet her in person! Patricia, being the gracious person she is, offered to set us up with a tour of Highgate Cemetery so I could see more of London while there. That’s truly just how cool she is.

I had been out in the Cotswolds with my family and friends for the weekend and was taking the train back to London when I got a message from Patricia telling me that David would be joining us. I’ll admit, I was already nervous to meet Patricia. She is a legend in the music world. But then, adding in her husband David Vanian for the meeting, I almost fell over. I tried to calm my nerves as I made my way to meet them at the underground station in Highgate.

They were the ultimate image of coolness. Patricia, in all black with her long black hair and super cool sunglasses and David in black leather gloves and a sweeping long coat. I felt beyond excited to be in their presence but Patricia immediately put me at ease.

We went on a tour of the Highgate West cemetery and as we marveled at the graves, Patricia immediately had insight. The tour guide stopped to show us the grave of an owner of a carriage company and Patricia pointed at the upside down horseshoe and said, “his luck ran out.” The cemetery was stunning and after the tour we went to the East cemetery to continue our wandering sans tour guide. We found Malcolm McLaren’s grave and David exclaimed, “I can’t believe he put his head on it!” Patricia’s instant quip was, “I can.” Patricia and I wondered back up towards the front while David searched for the grave of Karl Marx. While he was gone, we chatted about the punk music and Patricia reflected on how women started getting pushed out of it when the violence started, “specifically with Henry Rollins.” When David finally found his way back to us, he mused about how some young punks had wanted to get their picture with him, something I was honestly surprised hadn’t happened yet in my time with them thus far.

As we left the cemetery and headed for a coffee shop, David told me about how he used to work at a cemetery when he was first in the Damned (beyond appropriate). He dug graves and kept the grounds. I kept pinching myself because of how Patricia and David are the most legitimate goths out there (and most iconic too). As Patricia said, “Everything was a first, there was no scene, we were creating it.”

With the start of punk and goth, David and Patricia’s parents had different reactions to their involvement. David said, “My mother read the press, and the press was incredibly negative. It said we were violent… So I actually took her to a show, one of the worst shows I could. ‘You’ve got to see what this is really like, then you might change your mind.’ She met all the punks and changed her mind. She came out of it realizing the people were very intelligent.” Patricia on the other hand, had support from the beginning. “My mom was very supportive. She came to the Whiskey, and Alice’s mum and dad came,” she says referring to an early gig with The Bags.

Patricia and David met each other (or rather bumped into each other) for the first time in 1976. Patricia recounts, “[The Damned] were playing the Whiskey A Go-Go and I went to the show. I was running down the stairs and I ran into somebody who had on a mask…” “And it was me,” David inserts. “We never actually spoke that night,” Patricia adds. “Well you did kinda scream… which is the effect I have on most people (laughs)…I actually knew about Patricia from a mutual friend and kept reading things about the Gun Club. I wanted to meet her, I thought we’d get on really well. And then another mutual friend said she brought her sister to a show in San Francisco and I said you don’t have a sister and she said it’s Pat Bag. I made a point to meet her… I said I’ve got to meet this girl, can you bring her back? So we met at my gig in San Francisco and that was that,” David says. However, it wasn’t as simple as that. Patricia continues, “David was married and I was married. We didn’t see each other for years. It was a long strange hard way to get together again.” But they did it– sometimes you will fight through distance and obstacles to be together, and the couple is happily together still.

After Patricia left the Bags, she played with Legal Weapon and then, The Gun Club. Patricia’s first gig with the Gun Club was at the Santa Monica Civic. “I had one ten minute reheasal before… Looking back on it, Jeffrey [Lee Pierce] was on the spectrum, he talked at you, no social skills. But he was really talented, he was one off. He made his own world. When I was in the Gun Club people used to always come up and say we love you guys but get rid of the singer. And we would go, he is the band. ““Without him there wouldn’t be Nick Cave or Jack White,” David adds.

Most people probably know/recognize Patricia the most from her time with the Sisters of Mercy. However, if any indication about how that situation is, Patricia is legally not allowed to comment on her time with the band. After she left Sisters of Mercy, she finally had her very own project. But she didn’t like to be the front person. “I didn’t want to do that. I just sang. It was a funny time, a very difficult time for me… But then David and I got together and I just stopped doing it.”

Being with David did eventually lead to Patricia joining her final band, The Damned. “David didn’t ask, he never would have. Captain asked and I only joined because Paul Gray had been hit in the face with a glass. He wouldn’t finish the set, “he said,” I’m no hero Dave, I’m no hero” and he went off and Captain said how about Patricia? I thought, that’s such a boy band, that’s such a male band but I said okay we’ll try it. I kind of had to fight for my place with their audience.” Patricia played in the Damned all the way until she was eight months pregnant with their daughter Emily. She then retired from the band.

Their daughter, Emily, continues the family tradition with an interest in music. Patricia takes her to as many shows as possible. She plays instruments and David said that one day she was working on the piano and he asked “Would you mind if we tried putting something together? She has a total understanding of music.”

David and Patricia seem to have a very lovely existence in England. The Damned continues to play shows and had quite the Halloween spectacular this past fall at the London Palladium. Patricia’s favorite cemetery in England is Kensal Rise and her favorite historical spot is the Dennis Sever House. Patricia Morrison is a truly kind and extremely interesting woman that has an immense place in the history of women in rock. It was such an honor to finally get to meet her and spend time with her and her husband, David Vanian.